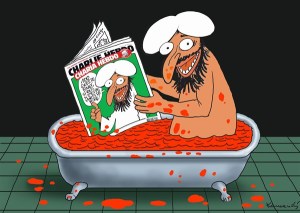 So wrote a user of the internet message-board 4chan last month. The thread concerned the rise of anti-immigrant rhetoric across Europe as a whole, and the sentiment quoted met with broad agreement.

The comparison used is certainly an apt one. Modern France, just like Germany in the 1920s, buckles under the weight of a failing economy. Unemployment (though slowly improving) remains a complication to the lives of young people in cities and towns alike. And extremism, on both the left and right, rises rapidly at the expense of a tired-out centre-ground.

One can hope, as one should, that the solution chosen for this malaise won’t resemble the thugs of the NSDAP, but that is far from decided. Marine Le Pen (a very suspicious character indeed) and her party appear likely to reap the political benefit from it. As to whether Le Pen’s newly professed moderation has any link with reality can and will only be revealed by time.

This radicalisation of French politics was thus already underway when an innocent seeming Wednesday became a bloodstain on the national calendar.

In Paris, two Islamist gunmen stormed the office of satirical magazine Charlie Hebdo and murdered 12 people, many of them noted cartoonists (pictured below). The magazine had been a target for many years, owing to its repeated lampooning of the Islamic prophet and its occupational solidarity with the Danish magazine Jylland Posten.

The aftermath to the massacre proved almost as bloody as the crime itself. Prior to their deaths, the two fugitive gunmen (both Algerian) held up a convenience store and petrol station. After this, they hijacked a car and engaged in a Hollywood-like moving gun-battle with Parisian police. Elsewhere in the city, A third Islamist, connected to the original attackers, took hostages in a Kosher deli. Four innocent French Jews would perish there before the captor could be disposed of.

Although both incidents are equally cruel and equally senseless, the Charlie Hebdo massacre has hit the global imagination hardest. An attack on Jews by Muslims is lamentably predictable and as such breaks no new ground. However, there is something fresh and pathetic about attacking people for drawing pictures. Even the Christians of the dark ages never stooped so low. It goes to show how girlish the Islamic constitution has become that it can now be bruised by the point of a crayon.

The reaction to the attacks internationally has been at once heartening and heart-sinking. While most Brits and Americans have offered their warmest condolences to the French people, others have (disgracefully) opted to bring up myths about Gallic passivity and cowardice. Let’s be quite clear about this: If anyone should ever doubt the patriotism or fighting abilities of the French, let him say so after reading a biography of Napoleon.

Much has been made of the fact that a French Muslim was a victim of this wave of violence. The police officer shot in cold blood outside the Hebdo offices was called Ahmed (thus allowing for the damage-limitation hashtag JeSuisAhmed on twitter). There is no solid proof Ahmed was a devout believer, but even if he was, what can this teach us other than senseless violence produces senseless results?

Though we may never know for sure one way or the other, I strongly suspect ISIS had a hand in this atrocity. The mysterious tweets sent from the (potentially hacked) Charlie Hebdo twitter account reference Caliph Baghdadi, and the professionalism of the massacre itself would suggest training from a quasi-military force.

Whether that is the case or not, there is certainly a bigger picture here. Just as those charity adverts urge of humanitarians, Islamists act locally but think globally. This nasty little attack –  though it was aimed at closing a specific vendetta – was really meant for all of us. The Muslims have made a giant sign for the whole of Europe to see, its huge words scrawled in innocent blood: “Be careful what you say. Be careful what you do. We know you where you live.”

And though Le Pen – with all her vague promises to go easy on the Jews and gays – is really not the answer we are looking for, an answer must still be provided. We cannot seriously be expected to lie back and see our hard-won freedoms smashed into fragments.