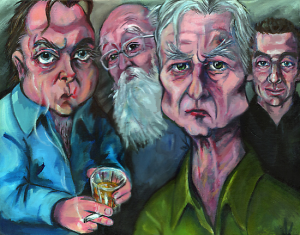 I wrote a post last week that seemed (and was) hostile to the school of thought labelled as ‘New Atheist’ – more explicitly, the works of Richard Dawkins, Sam Harris, Daniel Dennett and Christopher Hitchens.

Specifically, I criticised these personalities for repeatedly lying about Hitler’s religious convictions – for claiming, as they do, that the Fuhrer was a believing Catholic, when his real views were closer to rational unbelief.

I don’t want to write the same article twice, so if you’re interested in my argument, please scroll down to ‘Hitler Was an Atheist’ in last week’s bunch. On this occasion, I’d like to clear up my position in regard to the ‘New Atheism; and atheism in general, lest my previous words have failed to communicate my true opinion.

I’ll start by restating that I am the son of a Church of England minister, and (as it goes for most vicar’s sons) the experience has often led me to an extreme and reactive rationalism, inspired by (among other figures) Nietzsche and Sartre, the traditional heroes of the thinking Western adolescent.

At the time of my enrolling in University, I was so convinced by atheism that I rarely thought about it. As far as I was concerned, the debate was dead, and all that remained to do was for the rising generation to destroy any legacy of Christian thought; to liberate the West from its dusty idols, arbitrary loyalties and primitive moral worldview.

Since then, I’ve not gone back on my view of the cosmos, the historicity of religious texts, or the facticity of evolution. But what I have done is read more about the human animal and the role that religion plays in sustaining him, in reminding him of things he might otherwise forget.

I remember at college coming up with what I considered to be a bold new scientific theory: the idea that there is an ‘optimal IQ range’, below which the human behaves in a destructive or abusive fashion to others, and above which the human being malfunctions, seeks to destroy himself or otherwise rebels against natural law. The ‘theory’ (if it can be so dignified) was drawn from the observation that high-IQ people tend to neglect the fundamental practices of nature, most notably the need to reproduce, to avoid suicidal thinking, and to maintain connections with the rhythms of their fellow man.

In retrospect this seems slightly daffy. There are clearly benefits to high intelligence and not just for the individual possessed by it. But that said, I still believe there is something vital in the wisdom of the less able, in their commitment to the essentials of life.

This very week it was reported that by 2070, the number of Muslims will overtake the number of Christians to make Islam the largest religion on Earth. This has to do with three synergetic factors. First, Muslims still believe in reproduction. Secondly, Europeans and Latin Americans no longer reproduce at the required pace and quantity. And thirdly, Europeans are becoming more disjointed and secularised, leading to a collapse of the only cultural coalition large enough to compete with the spread of Islam.

This has less to do with theology than with natural priorities. Religion, though it may on occasion go against science and progress, nevertheless tethers the human mind to very important primal truths. To sever the European from his traditions is to sever him from the destiny those traditions were laying out for him.

According to Richard Lynn, Japan is the most intelligent country on Earth, yet it is turning into a high-tech nursing home. Sweden is similarly dying. Norway is dying. Germany is dying. Italy is dying. Even China is dying.

And that last example is an especially illustrative one. China has been forcedly atheist for over fifty years. In that period of skyscraper building, the birth rate has steadily but surely declined. This has been helped by – but cannot be wholly explained by – the ‘one-child policy’ that (in any case) accompanies the confident atheism of Communism.

Outside of reproductive issues, the abandonment of Christianity by Europeans has another global effect. The more impressionable and cultureless races, most notably the booming population of Africa may be increasingly drawn to confident religions like Islam and turn away from the tired out, apologetic religion of their former colonial masters. The wonderful civilising effect of European Christianity may vanish and plunge great swathes of the world into barbaric darkness.

To repeat my general position – none of these concerns imply religion is true or science false. All I recommend is to consider the void that comes after religion and weigh its benefits against those of history.

8 thoughts on “The New Atheism: A Clarification.”