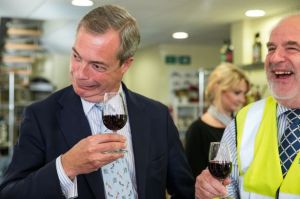 Well… that was interesting. The polls, the bookies and the media were all wrong. Britain held its nerve, voting to leave the European Union by a clear margin of 2 percentage points. I am shocked and surprised, pleasantly and unpleasantly.

On the vital matters of sovereignty and immigration, I think the right decision has been made. The European Union was stifling Britain’s independent spirit, obstructing the British Parliament and overriding British courts. It couldn’t carry on. A civilised vote to leave is surely the most dignified way of bringing the relationship to a close.

Early last year, I spent some time working as a language teacher in the Basque Country in Northern Spain. In order to make my labour legal in that country, I had to visit the local council offices in Bilbao and apply for legal status. This process, which in non-EU countries would have taken many weeks, if not months to complete, was seen to in a single afternoon. I filled out a couple of forms and I was away – a Spanish taxpayer with the full and permanent right of abode.

This luxury is not something to sniff at. It really is (was) the most dazzling privilege. One can only imagine how much money the wretched refuse of the Muslim world would offer for such a right.

This morning, with Britain now committed irrevocably to disentangling itself from the European organism, I can’t help but wonder what kind of deal will replace the generous and advantageous contract we have just torn up. Will European states take revenge on us? Will they band together and punish the plucky, rebellious Brits with draconian measures and pointless, bureaucratic restrictions? It is certainly possible.

I am sad about this. I never wanted Britain to fall out with Europe. Though I fully understand and accept that Europe, the historic and cultural concept, is distinct from the European Union, the two are nevertheless so entwined at present as to be inseparable. In rejecting one, we necessarily reject – or at least offend – the other. What a shame. The Islamists must be euphoric.

Whether the right thing to do or not, Brexit will inevitably cause major disruption to the lives of ordinary British people. Many of us will come to miss the words ‘European Union’ at the top of our passports. Those words, though never triggering any kind of pride or patriotic emotion, guaranteed us the freedom to wander unobstructed across a magnificent continent. It gave us the right to live in Rome, Berlin, Stockholm, Madrid and Warsaw; to work in Krakow, Copenhagen, Helsinki and Tallinn. We will miss that freedom horribly until it is assured us once again.

EU governments have reacted to the referendum with shock and disappointment

On a brighter note, the benefits of us leaving the EU are not inconsiderable. We will soon have the right to decide exactly how many European migrants make it past our borders each year, as well as how many are allowed to settle permanently. No longer will an endless stream of labour gush through a doorless doorway, suppressing native wages and over-saturating the market for skilled labour.

As well as this, law-making will finally be returned to a sovereign British judiciary. No longer will we need to ask for EU permission to pass judgements on foreign criminals, terror suspects and ‘asylum’ seekers.

EU regulations, passed entirely in EU courts, will no longer apply, leaving us free to decide our own standards of quality, health and safety, as well as (crucially) the shape of our bananas and cucumbers.

Finally, and most importantly of all, our elected government will once again be the supreme authority over the British Isles. No longer will we need to waste calories and column inches whinging about ‘unelected bureaucrats in Brussels’ or ‘faceless EU dictators’. Now, if an unjust rule comes to prevail over this kingdom, we will be able to change it quickly and democratically. British rule, to oversimplify the matter, has returned to the British. We have our country back.

Five minutes ago, David Cameron addressed the nation from outside No.10 Downing Street. With rare emotion, the Prime Minister announced that he will be standing down sometime in the next three months.

As to who will replace him, almost everyone has the same person in mind; namely, Boris Alexander De Pfeffel Johnson – the yellow (not blonde) haired former Mayor of London and standout figure of the victorious leave campaign.

If this does come true – if Boris, perhaps joined by Michael Gove, rises to the executive of the British state on the back of Brexit – then that is another reason to temper one’s joy at the result of last night’s vote. Boris Johnson is an idiot, more of a clown than a politician. I would rather be ruled by almost anyone else.

Will Brexit be worth it in the end? Only time will tell for sure. I am honestly surprised by how lacklustre my enthusiasm for the result has been. I thought I would be tap-dancing with restless euphoria, possessed with native pride. But I’m not dancing. I’m not even smiling. The issue seems more nuanced in retrospect than it did in prospect.

If you derive from one of the nations still attached to the European Union, I would ask you to do whatever you can to prevent a grudge emerging between your country and Britain. We do not wish to divide the West. We are not, by leaving the EU, denying our European-ness. We are still one civilisation, one culture. Perhaps it would have been better to stay and reform the links that bound us together, but we’ve made our choice. Please don’t make it any harder for us than it already is.