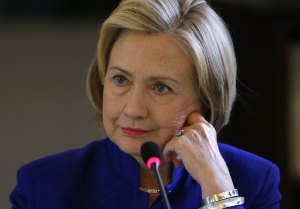 So… today (transatlantic time difference notwithstanding) is the day. The first debate between Donald Trump and Hillary Clinton will take place tonight in New York. I can hardly wait. This is, as I said in my post last week, the most important debate of our era. It will greatly influence, if not decide, the course of America’s future. Should Trump exceed the low expectations people have of him, the chances of his winning a majority in November will be massively enhanced. Should he make a fool of himself, his chances will sink very low indeed. This would be thrilling if it wasn’t also so nerve-wracking.

Anyway – to mark this momentous occasion, I will present here fifteen of the strongest (in my estimation) objections to a Clinton presidency. If Trump is to triumph at the debate tonight, he will need to focus on these points above all others.

1. She refuses to name the enemy.

Like President Obama, Hillary Clinton has repeatedly refused to the use the term ‘radical Islam’ when discussing terrorism in general and ISIS in particular. Contrary to what the mainstream media suggests, this is really no trifling matter. The phrase ‘radical Islam’ is itself a watered down and liberal framing of the problem (a more honest commentator would just say ‘Islam’). For Clinton to stop short of going even this far shows that she is either unwilling or unable to recognise (and thus deal with) the biggest challenge facing the civilised world.

2. She is dripping with other people’s money.

Unlike Donald Trump, who has largely funded his campaign out of his own pocket, Hillary Clinton has received hundreds of millions of dollars in donations. The individuals and organisations who have stumped up this money will have done so for a reason. What has she promised them? We simply don’t know. And that is a problem.

3. She is arguably unfit to lead.

No-one knows for certain the true condition of Hillary Clinton’s health. Though many on the internet have busily speculated, the facts remain, for now, obscured behind a haze of spin and denial. According to Clinton herself, she is more than physically able to govern and has sought to prove this by, among other things, opening a jar of pickles. The episode in which the Democrat nominee ‘overheated’ and was left unable to walk properly following a 9/11 commemoration event says otherwise.

4. She has no clear agenda.

Donald Trump, for all his faults, has been admirably candid about which direction he plans to take the country in upon winning the general election. His opponent is a very different story. Never in the last fifty years has a vaguer agenda been offered by a major presidential candidate than that which is now advertised by Hillary Rodham Clinton. So undeniable is this shortcoming that even the Democrat’s most die-hard supporters have elected to focus their campaigning almost exclusively on the weaknesses in Trump’s manifesto. Rarely has any solid, clear, feasible policy been set out either by Clinton herself or by those affiliated with her campaign. This strongly suggests to me that Clinton has a secret, under-the-table agenda, written up, in large part, by her donors (see point 2).

Hillary Clinton has virtually no charm at all. This much is evident from the meagre crowds the nominee has managed to draw at her lacklustre ‘rallies’ over the past few months. Even during the primary season, the nominee was totally outclassed and outperformed by her very able and inspiring opponent Bernie Sanders, to whom many millions of Democrat voters remain attached. This matters because, as president, Clinton will be responsible not only for the smooth running of the economy and public sector, but also for rallying the troops against America’s enemies and picking the country up after terrorist attacks and natural disasters. Does anyone really believe she is up to this?

Hillary Clinton’s political views, if indeed she has any, were brewed in the same pot as her husband’s. While I am too young to recall Bill Clinton’s administration with any clarity, I have read widely enough to discern that in terms of foreign policy, national security and immigration (the three major issues of this election), his regime was close to hopeless. Hillary Clinton has not once sought to distance herself from her husband’s record. She has not stated any meaningful disagreement with his agenda, and from this it is very fair to infer that she offers more of the same.

Hillary Clinton’s main career outside of politics is law, the traditionally favoured occupation of the political mountebank. Other examples of law-graduates-turned-politicians include Barack Obama and Tony Blair. I don’t think I need to say anymore.

8. She is coastal and out of touch with America’s heartland.

The secret of Donald Trump’s success is not, as the media alleges, his star-power and celebrity connections. It is his ability to connect and convincingly communicate with the denizens of America’s ‘flown-over’ country, AKA the heartland. Though Clinton has attempted during her campaign to touch upon the issues affecting this blighted region, her appeals have fallen on deaf ears. She is simply too coastal and too urban to be taken seriously when discussing the opiate epidemic or the decline of manufacturing. Trump, on the other hand, has, via his business dealings, genuine credentials on the meat and potatoes issues facing rural and impoverished communities.

9. She has ties with some of the worst regimes on the planet.

The Clinton Foundation, Hillary’s pet project, has received and given support from and to some of the worst governments in the world. These include (but are not limited to) Saudi Arabia, Algeria, Morocco, Qatar, the United Arab Emirates and Bahrain. While North Korea has yet to be explicitly embraced by the foundation, you would be a fool to rule it out entirely.

Hillary Clinton believes she deserves to win simply on the strength of her being a woman. This is a monumentally arrogant and presumptuous mindset to display at a time of real political strife and uncertainty.

Hillary Clinton is not a pro-gun candidate. Indeed, on this matter, she is arguably more problematic for the advocates of private gun ownership than Barack Obama has been.

Even the most vociferous and committed of Donald Trump’s critics acknowledge that the Republican possesses a sense of humour, a layer of humanity beneath his political sheen. At his rallies and in media interviews, the New Yorker has consistently displayed an ability to take matters lightly where appropriate (and yes, occasionally where inappropriate also). Hillary Clinton, by unpleasant contrast, is businesslike to the point of sociopathy.

13. She believes climate change is a more immediate threat than ISIS.

Not much elaboration is required on this point. I will only say that while climate change may or may not be a crisis in need of addressing, ISIS clearly represents (in the view of any reasonable person) the most pressing and urgent short-term threat to the stability of America and the greater modern world.

14. She is conventional on healthcare.

I tend to disagree with most right-wingers on the issue of healthcare provision. I support (and am immensely grateful for) the free treatment offered by the UK National Health Service. Though I imagine the idea might prove unpopular in the short term, I believe that America should strive to institute a similar system. Healthcare is no different – in my view – from the fire and police services. One should fund them with taxes, not private finance.

Hillary Clinton, as she has never sought to deny, is happily wedded to the set-up known unofficially as Obamacare – a wretched and ill-thought-out jungle of bureaucracy that has led, directly or indirectly, to thousands of job losses. Against this, Donald Trump, quite refreshingly for a Republican, has said many nice things about the British and Canadian health systems. If the New Yorker is able to shift conservative opinion on this, America would profit greatly. Clinton, like many of Trump’s foes in the GOP, offers only conventional and misguided thinking.

15. She is Hillary Clinton.