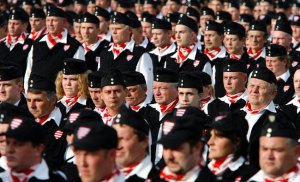 Those who monitor the fortunes of the far-right in Europe will be increasingly familiar with a bizarre Hungarian outfit known as ‘Jobbik’.

On the face of it, the organisation is a generic nationalist movement, aimed at closing Hungary’s borders, re-emphasising its national identity and cracking down hard on domestic criminals.

Beneath that veneer however lies a perverse, little-known ideology that should completely disqualify the party from any greater European solidarity. That ideology is called ‘Turanism’.

A Turanist website describes the scope of this concept as follows:

“The Turanians are a family of ethno-linguistically related peoples which include the Hungarians, the Uralic group (Finnic and West Siberian peoples), and the Altaic group (Turkic, Mongolian, Tungus-Manchu, Korean and Japanese peoples). The Turanians are the indigenous inhabitants of vast territories in Eurasia, from Central Europe to the Pacific Ocean, and have a rich and ancient cultural heritage… Throughout history, the Turanian lands have been invaded by foreigners: Semites, Persians, Chinese, Greeks, Romans, Slavs, and Germanic peoples. In many cases, the indigenous Turanian peoples have been and are still subjected to genocide, colonization, deportation, or assimilation. Foreign rule has not only caused great losses in demographic and cultural terms, but also economically and environmentally as severe damages have been inflicted by the exploitation and pollution of the Turanian lands.”

Hungarians, or ‘Maygars’ are therefore (in Turanist theory) not European in origin, but rather descend from a mixture of Central Asian peoples, closely related to the Mongolian, Turkic and (in some extreme variants of the idea) Japanese ethnic groups.

And Jobbik, far from the ‘White Nationalist’ movement the media has intimated hitherto, seems determined to de-emphasise if not abolish Hungary’s identification with European history.

Of all the follies of Turanism, it is naturally the identification with Turks that should most bother Counter-Jihad activists.

Unsurprisingly, given the local bitterness about being refused entry into the EU, Turanism is enjoying a particular renaissance in the Ottoman fatherland, where its nationalistic adherents hungrily recognise a knife with which to prise apart the bloc that so cruelly denied them.

A Turanic axis, inclusive of Turkey, Hungary, Azerbaijan and the Azeri region of Iran would be disastrous, not just for Western Europe, but also for Russia, whose vast Asian territory is claimed by the same movement.

For now, Jobbik is rightly sidelined by mainstream Nationalist movements for its Anti-Semitic, anti-Ziganist, and anti-Democratic energies. Only the BNP and like-minded siblings embrace the group and even with these, desperation (rather than approval) supplies the motivation.

Still, the party provides welcome evidence, if any were required, of how unmalleable theories of biology cannot allow for a realistic solution to the predominantly cultural battles of our era. A great deal of cultural history separates Hungarians from Turks, even if blood does not. It will be a measure of Europe’s strength as to which way Hungary turns.