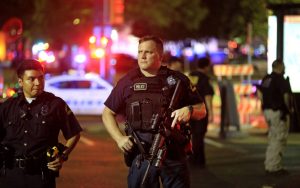 Anyone who lives in America, loves America, or places hope in its example and leadership will have lost a considerable amount of sleep these past few days. The  ghastly news from Dallas, Texas that five police officers have been shot and killed, apparently in revenge for the deaths of two African-American police suspects in Minnesota and Louisiana, has shocked the nation to its core.

“Suddenly,” NYT correspondents Timothy Williams and Michael Wines observe, “the panoply of fears and resentments that have made this a foreboding summer (have) been brought into sharp relief… Police officers and sociologists alike say that racial tension is approaching a point last seen during the street riots that swept urban America in the late 1960s when disturbances erupted in places like the Los Angeles neighborhood of Watts and Detroit and Newark, during summers of deep discontent.”

I won’t detail the specific incidents in Louisiana and Minnesota here. They have already been exhaustively covered by the press. Instead, I will ask the general question: Why is this still happening in America? Why is an ethnic rivalry that should have disappeared decades ago persisting in defiance of the current of political progress?

The answer, I believe, is incitement.

For as long as I care to remember, the insinuations of American news personalities, cynical politicians and radical ‘community leaders’ have issued without qualification or fact-checking from every form of US media. As a direct result of this, a whole generation of Black Americans has been exposed to an unremitting deep-tissue massage of poisonous miseducation and political conditioning, the fruits of which are now ripening into a terrible, violent greenness on the streets of American cities.

The narrative pushed by these crooks, it would seem successfully, is that American law enforcement (and by logical extension – the US Government itself) is institutionally racist, if not nakedly White supremacist, and dedicated to the perpetual oppression of all US minority groups. If you think I’m exaggerating these exaggerations, I would refer you to any of the hundreds of blogs written in support of the criminal network ‘Black Lives Matter’, all of which have advanced this nonsense consistently ever since the death of Trayvon Martin in 2012. 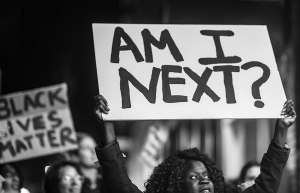 It would appear to matter nothing to the preachers of this false gospel that the available evidence suggests no such campaign has existed in America for several decades; that the police, far from being dedicated to offending or harming the African-American community, are increasingly required to be particularly cautious in their dealings with them, perhaps even more cautious and light-handed than with any other racial group. Truth, however, has never been a concern of propagandists. It only gets in the way.

As I wrote in an earlier article on this blog regarding racial tensions in America, there is actually a very simple explanation for the frequency (which can sometimes seem remarkable) of police abuses against Black citizens:

“Black people (on average) commit more crime in America than any other racial group. This is why there is more police action against Black people than against members of other races. This is also why there is more police brutality against Black people than against other races. Since there will always be bad apples in a national police force, and given the greater priority that force is compelled to give to one race, it is statistically more likely the bad apples will fall on them.” 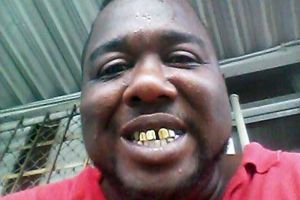 Now, and of course, no-one with a heart and mind would dispute that the shooting of unarmed Americans is morally unacceptable. It is. Nor would any right-minded person dispute that the American police – in some cases, not in all – have taken to behaving more like an occupying military than a protective social service. Just type in ‘militarisation of the police in America’ into Google images and you will be treated to universally unappealing photographs of SWAT teams riding down democratic streets in infantry-fighting vehicles and modified tanks. 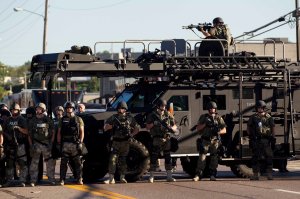 This isn’t natural, nor necessary, nor proportionate. America is the greatest country on Earth, with a spirit and philosophy of freedom envied the whole world over. It would be a world-historic tragedy were such a beacon of hope to be snuffed out under the leather boot of authoritarian statism.

But again we must strive to make clear that there is no institutional crusade against Black people ongoing in the US. The excesses of the police affect all races in proportion. Indeed, just a few weeks before the death of Mr Sterling, a 17 year-old White youth in Missouri was left with permanent brain damage after being repeatedly tasered for failing to exit his vehicle after a traffic stop. There are many other examples one could furnish, but the point is already made. America has a problem with police overreach, not Black America.

I truly hope that the prophecies being made of a coming ‘race war’ in the United States are as daffy as they sound, but I cannot be sure at this point. The tensions revealed over the past few days in online forums and on social media have been shockingly, burningly hot. Many young Blacks, though they should rightly be ashamed of what has been done in their name, have instead taken to actively glorifying Micah Xavier Johnson online, referring to the killer variously as a ’hero’ and a ‘resistance fighter’, as well as setting up facebook tribute pages in his honour. 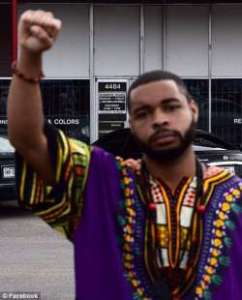 Micah Xavier Johnson – one of the confirmed perpetrators of the massacre in Dallas, Texas

And many Whites have been busily striving to equal this bigotry, with some calling for a violent civil conflict to re-establish a segregated America; others proposing the wholesale murder of all non-Whites, and still others blaming the entire problem on the Hebrews,

This is the Middle Eastern style of politics. It is, or should be, beneath the West, especially America; but the poison is now in the bloodstream. The Leftist crooks and inciters have achieved their desired outcome. The United States population is fragmenting as we speak into warring tribes, each of them armed to the teeth and readied for a fresh era of endless, pointless combat. There is no way of putting the toothpaste back into the tube now. I hope the media are happy. The Muslims certainly are.

That’s right – ever since the killings in Dallas were first reported, Muslims (or people with Muslim names) have been openly gloating on social media and in the YouTube comment section.

“America is like third world! Hahahahaha!” One illiterate message read. – “You say you are civilised and we are backward. You are worse!” Another jeered. – “America is doomed!” – “Time for you to suffer like the Syrians.” – And so on, and so on.

It is of course obvious why Muslims are so enraptured by America’s latest troubles. In an age when the Islamic world is collapsing into fiery embers, the stability and affluence of Allah’s arch enemy (the US) has long seemed a taunting and persuasive reminder of Islam’s fundamental cultural inferiority. As Syria and Iraq, once gold-plated centres of Islamic power and cultural dynamism, burn unceremoniously down to the ground, Americans watch football, drink cold beer and laugh at sitcoms. This hurts the Muslims. It gnaws away at them, making them think critically (and you know how much they hate doing that). American popular culture is a constant (and free) propaganda loop, effective because it advertises a peaceful, functioning society its enemies can never hope to replicate or compete with.

It was with this bitterness in mind that Osama Bin Laden once suggested weakening America by forming a destructive alliance with its radical minority populations, especially with disenfranchised Blacks. Being a man of some intellect (though not culture), the terrorist leader saw all too keenly how fragile America’s infuriating success could be made with the right amount of cynicism and professional manipulation.

I hope devoutly that his vulgar ambitions are not about to be realised.