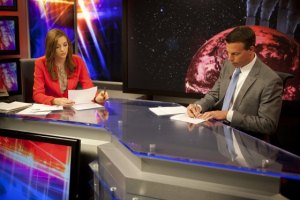 Indeed, the network’s slogan ‘Question More’ is clearly designed to promote a special independence of mind, as well as a willingness to showcase minority opinions.

And it has been true to this goal. In the 9 years of its existence, the channel given a platform to figures as diverse as Nigel Farage, Alex Jones, Norman Finkelstein, Pat Buchanan and Julian Assange.

What (if anything) links this colourful band of characters together is an opposition to globalisation and American Foreign Policy, both of which are imagined by the Kremlin as hostile to Russian interests.

“RT thrives on covering topics that make the U.S. look bad. Occupy Wall Street gave us images of NYPD officers pepper-spraying peaceful protesters and roughing up members of the press. (Robert) Snowden must have been manna for the network. Still, RT’s journalists swear they’re under no pressure to toe a party line.

“RT also traffics in the type of fringe punditry that’s found an audience across the U.S. media landscape. Its marquee anchor, the zany, histrionic Max Keiser, is a champion of 9/11 trutherism and financial apocalypse. Controversial commentators over the years have included people like the Russian historian who predicted that the dissolution of the United States was nigh, or the American one who believes the CIA is using unwitting citizens as guinea pigs to test dangerous drugs.”

Despite this predilection for exaggeration, RT’s coverage of some issues – notably Syria – has been commendable, with the channel filling a shameful truth-void in the presentations of the West. It is likely as a consequence of this that many patriots in both Europe and America have chosen to overlook the obvious biases of the network toward Putin and China, and welcome its refreshing lack of censorship on issues pertaining to Western policy.

But whatever value could be claimed for RT just a few weeks ago seems now rather more tenuous. The behaviour of the channel since the start of the Ukraine crisis has been shady, immoral and more-than-anything – distinctly amateurish.

Propaganda of the lowest kind has been passed off as news. Groundless accusations (often involving the Jews) have been bandied about with reckless abandon.

The process this effort has tried to defend, furthermore, is now – I argue – inexcusable. The sovereign nation of Ukraine has been mutilated by a vastly more powerful army in clear contravention of international moral standards, and without strategic justification (Russia would always have the Black Sea base at its disposal). The Ukrainian protestors, though there are inevitably some fascists among them, are not all ‘Nazis’ as the network has slanderously claimed. Even RT’s own anchors have rebelled against this tawdry lie-factory, some quitting dramatically on air in protest.

The devil’s bargain patriots have made with the network in the past should now accordingly be revised.

Russia is – needless to say – a very important country, one whose stability is essential to the stability of the world. This importance, together with the rich cultural heritage of the Russian people, makes its current decline into despotic inadequacy a tragedy of global proportion. RT is not a news-service, but a tawdry government mouthpiece suited to an Orwellian hell-state like North Korea, Turkmenistan or Belarus, not the nation of Dostoyevsky, Tchaikovsky and Gagarin.

Russia, to put it simply, is too good for Russia Today. And if that sounds like a play on words, it’s because it is one.