Russia’s intervention in Syria seems (so far) to be a very positive historical development. Seems to be , yet I cannot quite say ‘is’.

My sense of caution doesn’t derive from any hostility to Russia’s policy (which I generally support), but rather from my suspicions over the world response to it. While I personally love to see Russian bombs bursting in Islamist neighbourhoods, I am aware that members of our political elite are altogether more troubled by it. I am also aware of the reason for their unease.

Though it is the catchphrase of many lunatic characters, there really is something called the ‘New World Order’ – and in that ‘order’, things like this are never supposed to occur.

The NWO (the real one) is simply another name for the post-Soviet order, itself a slightly updated design of the post-WII order, with which it still bears many similarities. Conservative journalist Peter Hitchens (younger brother of Christopher) summed it up by rehearsing the following famous attitude – ‘Keep the Americans in, the Germans down, and the Russians out.’

Put in greater detail, the order was designed to keep America as the worlds only accepted military superpower. Expeditionary exercises by states unallied to Washington were to become the stuff of history. There were to be no more Stalins, Hitlers and Nassers; no more upstart challenges to the US military’s global predominance in the air, on land or at sea. This is why Milosevic and Hussein were so quickly disposed of, why Germany and Japan’s economic growth was once so unnerving, and why Putin’s Russia is now regarded as so threatening.

In the NWO, only Washington’s opinion on world affairs matters (the UK being little more than a button on America’s shirt). Most Europeans (myself included) are fine with this. Though it tends to make world affairs rather lopsided, American hegemony plays a very positive and important role in maintaining peace. If American might was suddenly subtracted from the globe, vicious, large-scale wars would begin almost immediately. China would begin bombing Taiwan (and possibly Japan). Iran and the stronger Arab states would start threatening the Israelis. Pakistan and India would recommence their nuclear stand-off over Kashmir. The Serbs (backed by Russia) would retake Kosovo and attack Albania. The Turks would move ruthlessly against the Kurds. Sudan (backed and armed by China) would retake South Sudan and begin a campaign of ethnic cleansing. Long-simmering tensions between Venezuela and Colombia would be brought to the surface. Russia would follow through on its threats to invade the Baltic and move its forces close enough to menace Poland and other Slavic EU states. Etc…

America has thus given the world a very long and very prosperous period of calm. We should be thankful for it. But now, Obama’s astonishing weakness on foreign affairs is now threatening to undo it all. Who can accurately say how far this will unravel and with what historic effect?

As anyone could have foreseen, America has loudly condemned Russia’s activities in Syria. Only today, Obama rather idiotically claimed that the airstrikes will end up ‘strengthening ISIS’ (by weakening those charming US-backed Islamists in the Al-Nusra Front, for example).

And in Britain, the reliable, chew toy-seeking David Cameron has since barked his agreement with the Washington line, followed swiftly by the human-shaped cardboard art-exhibit known as Francois Hollande. The media has been similarly obedient. As Russia Today drily noted “No sooner had Russian planes taken off to bomb ISIS terrorists.., claims made by the West’s anti-Russia lobby (were) repeated in much of the western mainstream media… (alleging that) Russia wasn‘t really targeting ISIS but “moderate rebels” and its strikes killed scores of innocent civilians… Now there’s two possible explanations for the lightning fast way this new chapter in the “information war” against Russia has been launched… The first is that the anti-Russian lobby have fantastic sources in Syria and know exactly who has been killed in air strikes moments after the bombs are dropped, or, in some cases possess clairvoyant powers and know who the victims will be even before the bombs fall…The second explanation is that the accusations and allegations that we’ve seen were already written up – filed and saved – and ready to be posted online as soon as Russia’s parliament authorized the use of military force.”

Western government and Western media are thus united in hostility towards the Kremlin. This might not end well.

I don’t believe our leaders are ready to intervene in Syria (that is, against Russia) – or not just yet. We nevertheless have to be prepared for such an occurrence. With Russia fighting proxy wars against American security assets, it isn’t Bond-novel fiction anymore.

And just what would happen if the West did intervene on behalf of its preferred barbarians? World War III? Quite possibly, yes. 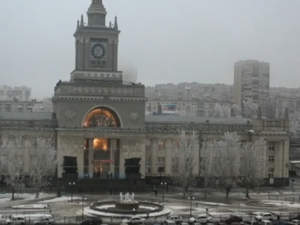 In the past week, Russian civil society has twice come under attack from violent Jihadists. First, a female suicide bomber struck a train station, killing 17 people. The next day, a second bomber hit, this time on a trolley-bus, the details and death-toll of which are only just emerging as I write.

In both instances, the perpetrators are suspected to be radical separatists from the perennially unstable Caucasus region. Their aim, established many decades ago, is to forcibly secede from the Russian Federation and form a Turkic Muslim state on its southern borders.

Russian policy on such groups has changed over the years, but famously became rather more certain of itself following the ascension to power of Vladimir Putin. Under Putin’s command, the Russian Air Fore reduced vast swathes of the Chechen capital to rubble. Needless to say, there is next-to-no chance the bombers’ wishes will be granted as long Putin remains in the Kremlin.

Hooray! then…. Well, maybe not.

If one looks at the future of Russian demography, with its shriveling Muscovite population, and most of its growth (and future human content) supplied by the regions discussed above, an argument can be made that Russia would actually be better off without some of these areas, at least from a perspective of culture and social-cohesion.

Russia is – after all – hardly lacking in territory. The cessation of Dagestan and Chechnya would be a small price to pay to prevent the Islamisation of a state with enough nuclear weaponry to fulfill some of al-Qaeda’s wildest fantasies.

It appears the attack on Syria has been indefinitely postponed. Russian pressure on both Damascus and Washington has yielded a peaceful solution based upon the destruction of Syria’s chemical arsenal. To this, it seems Mr. Assad has consented.

As to what to make of this turnaround, there are three popular interpretations:

1. America’s power has declined so far that it cannot now enforce its will on the international stage.
2. Barack Obama is a tactical genius who has shown how to deal with tyrants via the threat – not use – of military force.
3. Obama has been roundly humiliated by the wily and superior Putin.

The first, I believe, isn’t entirely baseless. American power is in relative decline, and has been so for many years. We would be wrong however to view a case like Syria as typical. Had the case for the intervention been more clean-cut and had it attracted support from the American public, there is every reason to believe that missiles would have been launched regardless of Chinese and Russian opinion.

The second interpretation has inevitably been promoted by the American Left, for whom every positive event in the world is part of Obama’s secret agenda. According to these folk, the Putin solution was what Obama wanted all along, and he was only threatening force to bring it into being. This is abject nonsense and can be dismissed without further analysis. If Leftists now believe Obama is imbued with powers of clairvoyance, that is their psychosis, not ours.

The third analysis here is the correct one. Obama and his government have been totally humiliated. The cause of intervention was wrong-headed from the start and both Liberals and Conservatives knew it. John Kerry’s stomach-churning speeches in favour of war were every bit as fake and shameful as Colin Powell’s notorious UN presentation in 2003.

We should be grateful to Russia for the outcome we now have. It would have been a moral disgrace to fire a single democratic bullet in the aid of Islamists. The US army could furthermore have been drawn in ever deeper, possibly tying up defence resources for many years to come. And this brings me to my next point:

There is a country the US army should be engaging, but it isn’t Syria, it’s Iran.

We are now perilously close to a nuclear Islamic regime in the heart of the Middle East. Such a regime would not only threaten Israel, but Europe, India and even China. We must never allow this. At the very least there must be a strike on Iran’s nuclear facilities, if not on its entire military infrastructure.

It’s a tricky situation, but the longer we wait, the greater the fallout will be.

I have some respect for the Russian President Vladimir Putin. His leadership, though authoritarian and often cruel, has greatly improved the lot of ordinary Russians, among whom the President enjoys considerable affection and support. On Syria too, the President has taken a uniquely rational and firm position, much to the benefit of us all.

That being said, at this weeks G20 summit, Putin made a silly, offhand comment that has offended many in the UK. Talking to a reporter, the President is alleged to have described Britain as ‘a small island nobody listens to’.

Whatever motivated him to say it (almost certainly the Syrian debacle) and though it isn’t technically-speaking a slight on British culture, I must join with the Prime Minister in defending my little island from such a patronizing and ignorant assessment.

David Cameron’s rejoinder has so far met with mixed reviews. Shortly after Putin made the gaffe, our Prime Minister gave a bizarre speech intended to list the glories of British achievement, historic and current. Among the examples he chose were the Beatles and One Direction.

Can’t we do better?

The nation of Russia has roughly 143 million inhabitants and a land mass of 17,000,000 square kilometers. Britain has 60 million citizens and a land mass of 230,000 square kilometers. That is indeed a great difference in size, so hats off to Mr Putin for noticing this. The difference in cultural achievement however is equally large, but this time exactly inverted. Despite its size, Britain can make a claim to be the most inventive country the world has ever known.

The following list is an excerpt from an even larger list of British inventions compiled by the Radio Times:

It’s never a bad thing to pat one’s country on the back, especially in the midst of such a bleak political and economic landscape. Whatever else Britain may be, its people are of the profoundest creative quality and without them the world would be considerably poorer.