Internet subcultures are so often exaggerated in scale and importance by the mainstream – offline – media that most reasonable folk tend instinctively to dismiss reports of their influence as hyperbole. Such was the case when Hillary Clinton devoted almost an entire speech to warning America of the insidious agenda of the ‘alt-right’, an internet coalition of racists, misogynists and Islamophobes allegedly in cahoots with the presidential campaign of Donald J. Trump.

Strangely, and unlike so many cyber phenomena reported in the media, the tribe to which Ms Clinton referred is notable for being very real, or at least very widespread. Though there is no single agenda or set of principles agreed upon by the alt-right, there is certainly a general Weltanschauung strong and clear enough to gravitate like-minded people towards it. This worldview is well-described in the following YouTube comment taken from under a video of the Clinton speech: “We (the alt-right) are anti neo-libs. That is the only reason we are alternative. Neo-libs/cons have been the conservative mainstream since 9/11. We are a backlash against that. Neo-cons are not real right.”

By ‘neo-libs’ and ‘neo-cons’ (Neoliberals and Neoconservatives) the commenter is likely referring to a consensus known elsewhere as the ‘New World Order’, the 1%, or (vaguely) as ‘Zionism’.

These labels, although having little to do with each other in fact, are used as synonyms for the force that is actively shrinking the world into a liberal, multi-racial, multi-cultural free-trade zone, in yet another word – the force and ideology of globalisation.

The idea that conservatives should be pro-globalisation is actually a very recent one. Traditionally, as the alt-right notes, right-wing political thinkers have been strongly nativist and culturally protectionist. The shift in conservative thought, beginning during the Reagan-Thatcher era, to laissez faire globalism is attributed retrospectively to the influence of non-native forces, often (predictably) to that of the Jews (sometimes referred to in euphemism as ‘capitalists’/’big business’/’bankers’/’the banks’).

The alt-right wishes to return the conservative movement to where it was before that transition; before economics became more important as a right-wing principle than blood, soil and culture; that is, before paleo became neo.

The alt-right has no single birthplace, but there are nevertheless a few websites and forums indelibly associated with it. Prime among these sites is the Japanese-cultural forum 4chan and in particular the /pol/ (politically incorrect) messageboard. Here, a right-wing political consensus has become entrenched, often (but not always) expressed with dark humour, that has subsequently bled out into the wider internet universe, evidenced by the broad use of memes like Pepe the Frog as well as words and phrases like ‘degenerate’ and ‘dindu-nuffin’ (the latter invention being used to refer sarcastically to African-American criminality).

The alt-right is connected to, but distinct from, the ‘Dark Enlightenment’ phenomenon I have written about previously. Unlike the latter, the alt-right is more realistic and less philosophical. While the Dark Enlightenment recommends absurd initiatives like the abolition of democracy and the return of divinely-appointed’ Kings, the alt-right prefers to concern itself with more achievable and substantial ideas, such as the abolition of third-world (non-white) immigration, building an opposition to political Islam and degrading the influence of certain varieties of feminism. This down-to-earth-ness is a large part of the reason the alt-right, unlike the Dark Enlightenment, has become a force to be reckoned with.

I have no idea whether this site would or should be considered part of the alt-right blogosphere. I only know that it has never been so described – and certainly not by me. I am, in my estimation, far too moderate, too much of a bleeding heart, to integrate smoothly into that crowd.

Though I recognise that races exist, I have never been a racist or a racial nationalist. Though I accept that certain varieties of feminism have inflicted great damage upon Western civilisation, I am not opposed to the idea of sexual equality, nor dismissive of the disadvantages women still face around the world on account of their being female. Though I recognise that he has joined the right side of the Syrian civil war and made constructive and wise comments about the bombing of Libya, I do not support or make excuses for the authoritarian, anti-democratic administration of Vladimir Putin. And so on…  The alt-right is simply too alt for me.

Is the movement as dangerous as Hillary Clinton is making out? The answer depends almost entirely on who is asking the question. If you’re a white, Christian, heterosexual male resident in the Western World, then the risk this movement presents to you is minimal. If, however, you are Jewish, homosexual, black, south Asian or atheist, I would be very cautious about taking the movement to heart.

There are decidedly ugly currents within the alt-right that are not adequately represented by its spokespeople. Milo Yiannopoulos, a Jewish-Greek homosexual, may well be regarded as the crown prince of the movement at present, but it does not follow that the general masses huddled under its banner agree with his lifestyle or look kindly upon his ethnicity. On the contrary, more often than not, the alt-right foot-soldier is loudly hostile to both Jews and homosexuality. If you require evidence of that, just spend an hour or two browsing the /pol/ board on 4chan yourself.

Anti-Semitism in particular runs through the alt-right like colours run through a stick of seaside rock. It is both below and behind it, providing a vital support to the worldview espoused by its adherents. The West is being taken over by foreign elements, they agree, because a hostile elite is conspiring against the natives. One need not refer to the hostile elite explicitly. Innuendo will do. Innuendo did the job in the thirties, too (sorry, Godwin). 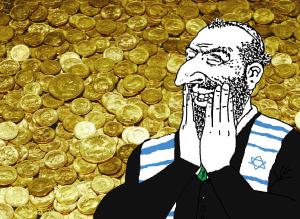 A variant of the anti-Semitic ‘happy merchant’ meme

I do admit that the alt-right is correct on some very important issues. On Islam, for example, the movement is reliably clear-headed and refreshingly consistent. On the virtues of a Trump administration, too, the movement is providing a much-needed counter-force to the almost universally anti-Trump mainstream media. The problem is the movement doesn’t seem to possess any kind of intellectual brake. It swerves habitually all over the place, sometimes finding itself on a main road and sometimes blindly ploughing through a field. This youthful unpredictability might make hopping on-board an attractive prospect for political thrill-seekers, but not for anyone else.

I suppose, if we must manufacture labels for ourselves, I am more of an alt-liberal than an alt-rightist. And I am not alone in that. There must be millions of people like me, scattered around the political spectrum, living unhappily in temporary ideological accommodation. It is high time we had a real home to go to.