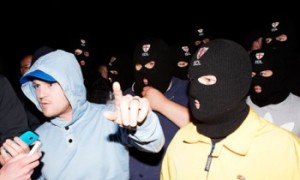 The word ‘backlash’ is a curious one to apply to the mood of English society following the events of last week. Nevertheless, the BBC, Daily Telegraph and numerous other media outlets invariably chose to label the atmosphere of disgust created by the slaying of Lee Rigby, an ‘Anti-Muslim backlash’, as if it were a change of heart, or an irrational misunderstanding.

The word ‘backlash’ is usually employed when talking about something that has previously been over-praised. The television series ‘The Office’ for example was praised so much and so often, that within weeks of the final episode being broadcast, pop-culture scribblers began to predict a ‘backlash’ against it. For me this isn’t what we’ve witnessed after Woolwich.

There has not been so much a backlash as a sequence of natural responses to evil by a morally healthy population.

The day before last, some hot-headed liberal emailed this blogger to accuse me of taking pleasure in the Woolwich tragedy. He charged me with being ‘excited and delighted’ by the event and the way it would bolster my ‘prejudiced worldview’…

He’s wrong about ‘delight’, but I won’t lie and say he is entirely wrong regarding ‘excitement’. Something within me was undeniably excited when news broke of the attack. It was the urge to take the battle to the enemy. I knew this particular atrocity would prove more socially explosive than the usual assaults on our transport infrastructure. The victim was a young, rosy-cheeked soldier wearing a ‘Help for Heroes’ sweater. His killer was a Qur’an-quoting thug showing zero remorse. How could people not be angered by something like that?

Still, I’m far from justifying everything that has occurred since then. According to the BBC, there have been arson attempts on Mosques, Death threats sent to Islamic community centres, and racist graffiti painted on the walls of multicultural enclaves. Most famously, a Muslim woman in Woolwich was rumoured to have had her Hijab ripped off by a passing youth.

I won’t defend the breaking of the law. But as to the people who commit these actions, they are not without legitimate grievance. Our elected leaders are plainly doing nothing to address the conditions which led to the murder. David Cameron spoke, ludicrously, of the attack as being a ‘betrayal of Islam’, and not, as a braver leader might have put it, an ‘application’ of the faith. With leaders like these, how are young people supposed to feel?

The exception to all this moping about has been – predictably – the English Defence League. Just hours after the murder occurred, EDL activists were in Woolwich, chanting and making themselves known. They were filling a void left by our police, our politicians and our media.

Lamentably, the same old classist rhetoric has come forth from those who should know better. Yes, yes, we know most EDL members are (gasp!) ‘working class’, and that consequently they sound different to the people who read the news. That doesn’t make them any less human, or any less English, or their patriotism any less valuable.

The poor are always more essential in times of conflict than the rich. It’s been that way in this country for centuries. Shakespeare wrote these lines in ‘Richard II’:

‘The pale-face’d moon looks bloody on the earth
And lean-look’d prophets whisper fearful change;
Rich men look sad and ruffians dance and leap,
The one in fear to lose what they enjoy,
The other to enjoy by rage and war.’

What was true in Shakespeare’s age is true in ours. The chattering classes in London want to deny that war is upon us because they fear the conditions of war; they fear ‘losing what they enjoy’. The ruffians by contrast, with nothing to play with but abstract ideals like Queen and country, are joyfully stepping up to the plate. Good for them, I say!

Soon, the dust will settle on this particular tragedy. Anger cannot last forever and grows weary like any other emotion. But from what I’ve seen during this ‘backlash’, the people of this country are louder, braver and more morally confident than ever before. We may not be there yet, but we are getting closer to the event which finally brings the country, young and old, into concert.

For now, let’s wish the EDL well. I hope they succeed in making clear to the Muslim community that England is not a faint or negotiable concept – and that once roused, its people do not fall quickly back to sleep.