In a striking video uploaded to YouTube last week, the Conservative Party brands new Labour leader Jeremy Corbyn a ‘threat to the national security of the United Kingdom”, offering as evidence video footage of the squirrelly Marxist using phrases like “Our friends in Hamas” and “Our friends in Hezbollah”, as well as his now notorious lamentation of the death of Osama Bin Laden. At the time of writing, the video has received hundreds of thousands of ‘hits’, and has been broadly praised – both within and outside of labour’s swelling (but ridiculous) suburb of the imagination.

But just how dangerous is Corbyn really? Isn’t it true that the English press often exaggerates opposing viewpoints in order to discredit them, and that the scepticism inspired by this record has a reputation of being proven correct…? Yes. That is true. But on this occasion, the wolf is as real as they come.

Much has been made of the fact Mr Corbyn refused (during a service to remember the fighter pilots of WW2 – ‘The Few’ who prevented the occupation of Britain and the genocide of its Jewish population) to sing the national anthem. Commentators on both sides of the political arena have wondered aloud whether a secret republican agenda exists on Corbyn’s timetable. At the very least, they note, it seemed a profane gesture of disloyalty to the Queen, and one that can only have been deliberate. What did he mean by it? Why not just say ‘God Save the Queen?’ – does it even matter?

I think personally that it does – in this context. This is because Jeremy Corbyn, over his long, ignoble career, has never displayed a sign of real affection for the United Kingdom. His support for enemy forces in times of war represents no recent degeneration of his personality. He has always spoken warmly of the IRA despite its endless campaign of random violence against the English public. His ‘friendship’ with Hezbollah and Hamas marks only the latest phase in a lifelong campaign of anti-Zionist fire-eating. And though rumours of anti-monarchism seem as yet unfounded, Corbyn’s socialism remains of the solidly internationalist variety.

How can we possibly expect such a man to act in the national interest of the country? How can we expect a man who considers national borders to be constructs of the imagination to treat this nation with special favour?  We can’t, of course. We really can’t.

Since his election, Corbyn has selected a shadow cabinet of the sheerest rabble imaginable. Among the better known are the anti-White bigot Diane Abbott (a woman rumoured to have dated Mr Corbyn in his more tender years) who now counts as Shadow Secretary of State for International Development, John McDonnell, the notorious – if supposedly repentant – apologist for Irish terrorism, who now counts as Shadow Chancellor and the arch feminist Angela Eagle, who is now Shadow Secretary of State for Business, Innovation and Skills.

This is joke politics. This is an ill-conceived throwback to the oil-starved, rubbish-strewn, strike-crippled days of the late Seventies. No-one in their right mind would vote for it. But what if those not in their right mind are the majority? What happens then?

Well, if Corbyn become Prime Minister, the following calamities will be visited upon us. We shall lose our prized (and much envied) partnership with the United States. Immigration will go through the roof. Anti-terror measures will be eliminated, leaving the population at risk to attack from ISIS cells. The already decimated British military will be reduced to a purely ceremonial force. The entrepreneurs (upon whom we all depend for our continued prosperity) will be chased overseas by leaping rates of tax. Far-right political parties will be brought back from the dead, threatening the harmony of English civil society… The end of Britain, in other words. The end of everything we value and have ever worked for.

Corbyn must be stopped and stopped quickly. We cannot simply lie back and rely on the ‘good sense of the British electorate’ when that good sense is not yet proven to be typical. If a friend of yours expresses support for Corbyn, you should react in the same way you would if they expressed support for al-Qaeda. Support for Corbyn must be characterised as not only wrong, but treasonous and extreme. Because that is what it is. Treasonous and extreme.

The 2015 general election result is in. Out of the three possibilities – great, OK or terrible – the ball has slipped into the second groove. We have an OK regime, a tolerable one, not especially healthy and not particularly self-destructive.

The Liberal Democrats have been shot to pieces and will find it difficult to survive. The Labour Party is far from dead, and will soon reinvigorate itself with younger generation of advocates (the favourite for leadership being, of course, the ‘British Obama’).

The UKIP grenade, much hyped as being nuclear in its fallout, went off with a silent puff. Farage has been fatally embarrassed. The faces of Middle England are shiny with tears. Chinks of hope for the future have closed.

The Islamisation process ongoing in parts of Britain has not been altered one bit by the result. It would have been quicker under the Labour party, and slower under UKIP. The Tories won’t interfere with it one bit.

That’s about all that can be said. 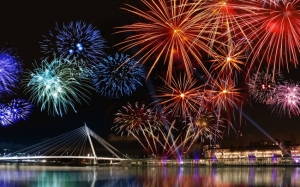 Every year around this time, the esteemed political journal ‘The Economist’ releases a speculative guide to the coming twelve months. A few days ago, as I waited in Euston station – along with seemingly half of England –  for an overhead cable to be fixed, I had the chance to browse through this year’s edition.

In keeping with the magazine’s drab, over-cautious reputation, much of the content predicted an undramatic year, (the only exception being a proposed inflammation on the Korean Peninsula).  Overall in fact, the tone was almost optimistic. Several of the dangers which seemed so imminent and dangerous in December 2012 are now, so the editors claim, much closer to resolution. The Euro currency saga – for example – is less turbulant than it was twelve months ago. Despite unemployment figures in Southern Europe remainig high, EU stock markets in general are recovering, and while the recession is still technically underway in some industries, economists on both sides of the political divide accept that things are starting to get better. In America and Japan too, the financial outlook is considerably rosier. More people are in work. Stock markets are rising. The tone of the press is noticeably less apocalytpic.

But politics, like life, is more than economics, and personally, I believe we’re in for a more tumultuous period than both the Economist and the economic situation would imply.

Here, without further ado, is the long-awaited, long sought-after, long-dreamed of DTMW guide to the flashpoints of 2014. I have selected three and they are presented in no particular order.

1. Romanians, Bulgarians, and the End of the EU.

On January the 1st, the citizenry of Romania and Bulgaria will wake up to a new liberty, namely, the freedom to live and work in any member-state of the European Union without restriction. Of this prospect, many frightened words have already been written. Only today, the Daily Mail speculated that

“After immigration controls are lifted, Britons could find their jobs are squeezed…. while community tensions could rise as the new wave of migrants fight for work with other Eastern Europeans who have been settled in Britain for a decade.”

The sentiment here is more than xenophobic hype. Freedom of movement from the East of Europe to the West has posed – and will continue to pose – a far greater threat to the European project than the chaotic abstractions of finance. As history well demonstrates, a population can peacefully tolerate being out of work for quite some time. It’s asking a lot more of people however to tolerate being replaced in the job market by foreigners. And this frankly is what has already happened in London, Berlin and Madrid with the influx of hard-working Poles and Ukranians.

Just in London, 3 out of every 4 non-professional jobs now go to Polish migrants. This fact, (alongside the social tensions created by Muslims), can explain the astonishing departure of White Londoners from East London to Essex and Kent, and with them, the extinction of London’s historic culture, dialect and way of life.

How will this already tense situation cope with a flood of even poorer migrants, prepared to work even harder, for even less? This, not the fluctuations of currency, is the real achilles heel of the EU project. If Romanians and Bulgarians (including Romani migrants) flood the West of Europe in sufficient numbers, 2014 may well be the final year of the European Union.

As part of my Politics degree, I was required to study the series of massacres collectively known as ‘The Rape of Nanking’. This gruesome episode, in which 250,000 Chinese were butchered in cold blood by rampaging Japanese soldiers, still exerts a ghostly influence over East-Asian politics. China will not forget the obscene cruelty and racism of the Japanese during World War II, any more than East-Europeans will forget the cruelty of Stalin. And this is why the recent visit of Japanese Premier Shinzo Abe to the Yasukuni shrine was rightly described as an escalation of what is fast-becoming a ‘Sino-Japanese cold war’.

How serious will it get? No-one knows. But the worst-case scenario involves a death-toll in the high-millions and an economic blowback stretching from Tokyo to Seattle.

3. The Collapse of the Anglo-American Right.

Following the dire Romney campaign of 2012 and its inevitable failure to dislodge the socialist incumbant of the White House, the Republican party (and the right in general) appears to have quickly spiralled into a civil war.

Glenn Beck has called for the defunding of the GOP. Ann Coulter and Rush Limbaugh are now devoting as much energy to berating the Republicans as the Democrats. Approval ratings for the Republicans among its grassroots supporters have never been so foreboding. Talk of constructing a third-party run along the lines of the Tea-Party faction are now being taken seriously by the press and party donors alike.

In Britain meanwhile, the mass defection of voters from David Cameron’s liberal-conservative regime to the solidly Eurosceptic UKIP is crippling the prospect of a cohesive resistance to Labour. In the 2014 European Parliamentary Elections, Tory HQ is bracing itself for a humiliation so severe that it may incapacitate the party for over a decade.

In both countries, the radical right and the mainstream right are pulling in opposite directions. The effect is to leave the entire tendency weakened and confused.

The Anglo-American Right is collapsing….

And as the right divides and turns against itself, the Anglo-American Left has never been so healthy. Despite Obama’s approval ratings, the Democrats have every reason to feel confident about achieving a third term of office in 2016. The British Labour Party meanwhile, despite a ruinous legacy and an unpopular leader, are cruising for an easy victory in 2015.

So there you have it. The end of the EU, an East-Asian Cold War, and the beginning of a transatlantic Leftist windfall.

But other than that, Happy New Year.