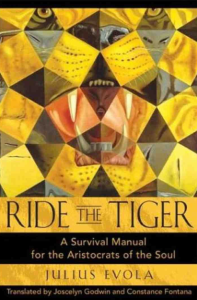 I’ve been reading philosophy since I was 15 years old. Since my teenage years, my favourite writer has been Friedrich Nietzsche, the predominant poet of the German language and (in my view) the greatest thinker of the last 500 years. But for the last decade or so, I’ve tended to neglect philosophy in favour of history and politics. My degree is in Politics and Economics. I am a political blogger and we all live in a uniquely politicised era.

Julius Evola’s ‘Ride the Tiger’ is the first work of philosophy to distract my attention in many years. You may remember that this blog is named as a refutation of Evola – whose work ‘Revolt against the Modern World’ advocated a rebellion against industrial development.

That book, commonly regarded as his masterpiece, is garbage. ‘Ride the Tiger’ on the other hand, continues to fascinate me. At its heart, this book (described by some reviewers as a self-help book for fascists) ponders the right way for a person of intellectual and spiritual depth to survive an age of stupidity, dissolution and over-democratisation.

To try and allow the reader to learn this ‘correct’ way, Evola takes issue confronts Nietzsche directly by reforming the philosopher’s classical dichotomy of ‘Dionysian’ against ‘Apollonian’.

In case you are unfamiliar with that dichotomy, I’ll try to briefly explain it here.

For Nietzsche, to be ‘Dionysian’ is to live in slack obedience to reaction and emotion; that is, to follow the impulses of pure physiology and worldliness; to live, as it were, without rationalisation (Dionysus, incidentally, was the Greek God of intoxication and wine). Nietzsche often suggests more explicitly in his later work that the reader choose ‘life’ over ‘thought’ and his noted thought experiment imagining an ‘Eternal Recurrence of the same” is designed to provoke this way of thinking in the reader. ISIS and al-Qaeda for example, pursue a life of unrestrained impulse and barbarity. In this way, they are far closer to the Nietzschean ideal than many of his Western readers would care to admit.

The Apollonian spirit, by contrast, is an attitude to life and art that rationalises and ‘stands back’ from existence; one that refuses to follow impulse and places greater value on the mind and the realm of intellect. This is undoubtedly closer to the spirit of the modern age than the former concept, given that we are encouraged to sublimate our instincts into the pursuit of rational goals (wealth creation, civility, security etc…).

In Ride the Tiger, Evola suggests a fusion of both concepts – the construction of what he called Dionysian Apollonism. As this name would suggest, Evola advises us to take inspiration from both philosophies. We should live in a way that honours our nature and innate drives, but in a way that allows us to navigate our way through modern society.

Evola rejects the barbaric as infeasible and self-destructive. He suggests instead the pursuit of primeval goals in a disguise of civility. This is what ‘Ride the Tiger’ is chiefly concerned with.

The title of the book is derived from a Hindu parable. There are many variations on it, but the basic gist is as follows: Imagine a tiger is charging at you at great speed… Your first impulse might be to fight or ‘take on’ the beast. But if you do this, you will surely lose, since the beast is more powerful than you are. However, if you manage to leap on the back of the tiger and ride it, you may be able to harness its energy and strength for your own ends.

For Evola, the tiger is modern industrial society, something he hated with a terrible passion but which he conceded was too strong to oppose. Rather than commit suicide by attempting a futile revolution against it, we should instead try to play by its rules, integrate into its system, but all the while stay faithful to higher and more transcendent concepts.

I understand and concede that Evola’s philosophy is esoteric and strange and also that the Italian was a confused anti-Semite and political fascist. But this short, strange and beguiling work has the potential to haunt the thinking of the reader long after he/she has closed it.