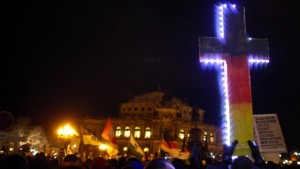 A couple of months ago, a political poll was published in France that showed Marine Le Pen’s Front National in the lead. One month later, record-breaking protests against the Islamisation of Europe were held in Germany, the most powerful country in European Union. One week on from that, two massacres occurred in swift succession – the first at a Parisian comic, the second at a Parisian Kosher Deli. And despite all the pointless carnage caused in those incidents, Muslims have apparently chosen to make another move this afternoon, taking three hostages in a suburb outside the French capital. This intensification (or quickening of the pace) of history must represent something. I’m sure that in due course we will be told it signals the failure of socialism, capitalism, the European Union, social integration or some similar garbage. But I have a feeling they’ll be wasting their breath. The people know the zeitgeist. We are now approaching the endgame of Islam in Europe.

And this is no bad thing of course. This is a conflict (or rather, contest) that should have been a first round knockout. The superiority of the West is so great that even Muslims vote with their feet to join us here.

And had they behaved themselves, treated people with kindness and tolerance, and not tried to enforce their way of life on others, they could have become an accepted, even valued minority, no more controversial than Africans or Jews. As it happens, we have been subjected to the meanest hell. Our citizens, young and old, male and female, have been stabbed, punched, raped, pimped and blown up. Had this behaviour been inflicted on a Muslim country by Christian migrants, those migrants would hang from lampposts and their innocent peers would be expelled.

So bring on the end game. Let it finally be here. Bring on the crowds in city squares demanding deportation. Bring on Pegida, Geert Wilders and the EDL.

If you hear of an anti-Islam demonstration near you, however small, please join it. If you know a person on the fence, knock him over onto the right side of it. The quicker we can get this out of the way, the sooner Europe can go back to its traditional pursuits of science, literature and progressivism (in the good sense of that word).

The author of this blog has never been on the soft side of the counter-jihad spectrum. I have made no secret of how I think this should end. And now, at last, I think that end is in sight.