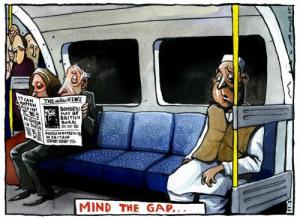 Last week on the popular satirical news quiz ‘Have I got news for you”, the guest host Alexander Armstrong quipped that to have ‘quiet crisis of liberal conscience’ was the ‘standard procedure’ for when a Muslim sits next to you on the tube. The joke received what it deserved; a pattering of knowing, nervous giggles.

What do you do when this happens? If you’re a Londoner – or, for that matter, New Yorker, Muscovite, Parisian, Roman or Berliner – this situation and your reaction to it is really no laughing matter. Choose wrongly and you may lose the use of your legs or even perish altogether.

Where I live (in Putney) I have the luxury of using the District Line, a relatively Muslim-light part of the capital’s network. I’m aware of the crisis Armstrong alludes to, but whenever I’ve used the Islamised lines of East-London, mine has a different content. It isn’t a crisis of ‘conscience’, but rather of etiquette. The question isn’t ‘How might I suppress/conquer my own bigotry?’, but ‘Will my fellows think me cowardly or rude if I switch carriage at the next stop?’.

I should clarify before going forward that we are talking here of devout Muslims; that is, bearded, religiously dressed men, or completely veiled women. I don’t feel any anxiety sitting next to a brown person. It should also be clarified that I mean here situations in which one will be seated for a long time.

With that out of the way, I’ll confess to what I’ve done in the past – not always, but on occasion. If a devout Muslim has chosen a neighbouring seat, I will often wait until the train is at the following station, head calmly out like that is my stop and then hop back into the neighbouring car instead. On most of the these occasions, it has been because the Muslim in question is embellished with a backpack or bulky satchel (those with memories of 7/7 will appreciate why this matters). I’ve never felt a whiff of bad conscience for doing this. My legs, my arms and my life mean infinitely more to me than my sense of political correctness.

I also think that if Muslims should ever dare to repeat an enrichment of the 7/7 kind, we could make good use of this gesture as a means of protest. Though I still make cover for myself when switching carriages, in the event that Muslims once again bomb our infrastructure, we could make standing up when a Muslim sits next to us a very emphatic display of moral resistance.

In dignity and silence, this public motion would make known our willingness to put our safety before the bullying demands of established politics.