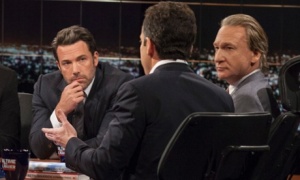 The showdown between Ben Affleck and Bill Maher (regarding Islam) has been widely publicised. Affleck’s warped arguments have been subjected to great and detailed criticism (including by ‘liberal’ Muslims) and yet the ideological trenches on both sides remain almost completely unmoved.

That’s no surprise, really. On the issue of Islam, people are only semi-rational. Left-minded folk especially are wedded to their ideas in a very intimate way. Arguments that go against their position are evil spirits. The orthodox defence of Islam is their religion.

I won’t therefore offer yet another analysis of the Maher-Affleck conflagration. I think it will be more worthwhile to consider the human aspect behind the politics; to pose the broad and vital question – How does someone deny the terrors of Islam in the modern world? If we answer this, we may be able to better understand how far we are from winning the argument.

Imagine for a moment that you are a ten-a-penny liberal. Imagine that every night you sit in front of Fox news and scoff at Glenn Beck, Ann Coulter and Sean Hannity and all their stupid bigotries, that you know for certain that they are wrong and that you are convinced Islam is an unfairly maligned religion of peace.

Let’s say that on a single evening, newly severed heads are reported in Syria, Muslim women are reported to have been executed by the Islamic Republic of Iran, and terrorist plots are frustrated in America and London. As a liberal, your goal is to fail to integrate these events, or else to find an equivalent in the West or its allied nations. If you can’t, then the evil spirits will break through your defensive positions and your political identity is threatened.

Where do you go first? Perhaps Israel. Yes, Islam is surely no worse than Israel. What about all the heads severed by IDF missiles in Gaza? Perhaps if we didn’t bomb the Muslims, they would be perfectly friendly.

Where else? How about America? Damn right. The US army bombs Muslims all the time. So what if those bombs are dropped to liberate Muslims from tyranny? America is a fucking tyranny, right? It’s run by evil corporations and hook-nosed, cigar-sucking Zionists. If anything, the Islamists have come to liberate us.

But you’ve used these self-consolations before and this time, for some reason, they’re not helping. You feel that you might be lying to yourself. In a desperate mood, your mind reaches for the stronger stuff…

Well, what does Bill Maher suggest we do with the Muslims? Kill them all? Put into gas chambers and close the door on women, children and innocent moderates? So what if Islam is violent. Where is all this headed? This isn’t actually a bad argument and so it soothes your mind enough that you are able think about something else.

That’s the end of our experiment. You’re back in an educated, rational mind again. I hope that wasn’t too traumatic. The sort of thinking we have described here has a name. It’s called ‘bad faith’, for which the internet definition is as follows:

‘(in existentialist philosophy) a refusal to confront facts or choices.’

Sartre, one of the greatest popularisers of the concept, chose this illustrative example in his Magnum Opus ‘Being and Nothingness’:

“Let us take the case of a woman who has consented to go out with a particular man for the first time. She knows very well the intentions which the man who is speaking to her cherishes regarding her. She knows also that it will be necessary sooner or later for her to make a decision. But she does not want to realize the urgency; she concerns herself only with what is respectful and discreet in the attitude of her companion. She does not apprehend this conduct as an attempt to achieve what we call “the first approach”; that is, she does not want to see possibilities of temporal development which his conduct presents.”

This example fits our subject rather well. The Leftist does not fail to see what we see about Islam because he is ignorant, he does not see it because he does not want to see it. The Leftist has chosen a mindset, not a position. A mindset is invulnerable to temptations from other ways of thinking because it is bigger than the views it holds.

The Western Muslims who are content to smile and proselytise to us now, desire ultimately a society that offends the human spirit. We understand this intention clearly and would rather stop its potential altogether. The Leftists – so expertly cynical in other contexts – deliberately fail to recognise that potential, seeing only the pleasant signs and chastising those who notice the ominous ones. To put it simply, they deploy strategic ignorance.

I really do wonder how they sleep at night. Surely human dignity must naturally spring back from this poise and keep them disturbed. But perhaps I’m wrongly presuming that they retain any humanity at all.