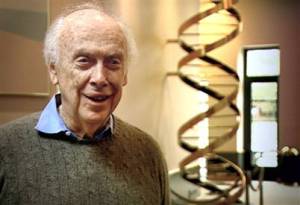 James Watson, the genius who – with Francis Crick – discovered the structure of DNA, has fallen on hard times. Ostracised for his comments on race and intelligence many years ago, the distinguished scientist has now felt the need to auction his Nobel Prize medal to the highest bidder.

Some have greeted this pitiful news with heartless derision:

“This sounds awful” –  wrote Adam Rutherford in the Guardian –  “…an 86-year-old hero ostracised for his views, shooed from public life by the people who walk in his scientific shadow…. But it’s not awful. Watson has said that he is “not a racist in a conventional way”. But he told the Sunday Times in 2007 that while people may like to think that all races are born with equal intelligence, those “who have to deal with black employees find this not true”. Call me old-fashioned, but that sounds like bog-standard, run-of-the-mill racism to me.”

No sympathy there then. Rutherford’s twisted viewpoint is repeated across the spectrum of the uninformed mainstream. It is only outside of this spectrum that the matter is seen for what it is – an unambiguous tragedy and a disgrace to science.

A man who has done more than anyone alive to aid humanity’s understanding of itself; a man whose invention and wit upgraded the field of science, exposed the hidden potential of medicine and stirred the imagination of a million minds is reduced to near-penury simply for holding an unfashionable opinion.

Watson reminds me of nobody more than the British code-cracker Alan Turing who, after breaking the enigma code of the Nazis and thus enabling the defeat of fascism, was cast out to the margins of society by his ungrateful country for being homosexual. (Turing later committed suicide by biting into an apple injected with cyanide).

The Left adores Turing and so he is wildly (and rightly) venerated. Watson annoyed the Left and so he is ostracised. That says a lot about which political wing is currently dominant over academia, doesn’t it?

And is Watson actually wrong? Surely that is the most central and vital thing to consider. Here is the statement that got him into this mess:

“I am inherently gloomy about the prospect of Africa [because] all our social policies are based on the fact that their intelligence is the same as ours —whereas all the testing says not really… people who have to deal with black employees find this not true.”

This (admittedly clumsy) statement is far from ‘hateful’. It is grounded in fact by a crushing weight of experiment and analysis. Here is an excerpt from the book-length study of the subject ‘The Bell Curve’:

“Ethnic differences in measured cognitive ability have been found since intelligent tests were invented. The battle over the meaning of these differences is largely responsible for today’s controversy over intelligence testing itself…There are differences between races, and they are the rule, not the exception… External evidence of bias (in IQ tests) has been sought in hundreds of studies…Overwhelmingly, the evidence is that the major standardized tests used to help make school and job decisions do not underpredict black performance, nor does the expert community find any other general or systematic difference in the predictive accuracy of tests for blacks and whites.”

Those who would call James Watson ‘ignorant’ are themselves ignorant, and those ‘scientists’ who back these catcalls should not be considered scientists at all.