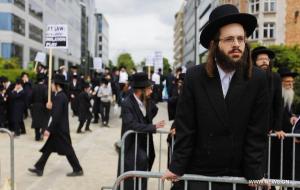 Ever since the attacks in Paris, the question of whether you, the Jewish people, are safe in Europe has been hotly debated. The actress Maureen Lipmann, the editor of the UK Jewish Chronicle and numerous other public figures have questioned whether there is any longer a place for you on this continent. Even the Prime Minister of Israel, Binyamin Netanyahu has called for your mass emigration to Israel, citing the same security concerns.

After Copenhagen, the second case in swift succession that a Jewish venue has come under attack by Muslim colonists, more of you than ever will be beginning to wonder if such sentiments are justified.

Europe is in a dire condition. I won’t pretend otherwise. Nevertheless, I think it would be a terrible shame is you were to abandon it and its people to cultural desertification. As has been said by innumerable French intellectuals over the past months, a Judenfrei France is not ‘France’ at all. I would extend that even further. A Judenfrei Europe is not ‘Europe’ at all.

It probably goes without saying that had you never settled in Europe, many of the glories of the continent would never have been possible. In European science, medicine, the arts and political thought, you have been a leading edge ever since your emancipation from the Ghettos.

In the aftermath of Paris, it has not been pointed out enough that the supreme work of modern French literature, ‘À la recherche du temps perdu’ was written by an author of Jewish origin; that the halls of French philosophy are similarly decorated with Jewish achievements; that the economic fortunes of Paris itself are entwined with the security of its Jewish community.

The fear you feel is obviously justified. The Muslim conquest of Europe is proceeding at an accelerating pace and challenges everything we hold dear. Ghettos of violent intolerance are becoming a feature of everyday life, not just in France, but in Britain, Germany and Scandinavia too. From these Ghettos, there will likely be further attacks on the general public and on your community in particular. People will die. Women will be raped. Transport networks will be blown up and trains derailed. Perhaps there will one day be an attack on a French nuclear reactor, sending winds of toxic fallout across the nearest residential sprawl.

You could, of course, flee to Israel and from there watch the descent of Europe with a grinning, “told you so..” schadenfreude – but surely this is a gutterish pleasure befitting a people of far lesser qualities than your own.

I understand there is a demographic war in Israel and that an exodus would bolster the Zionist project, but surely your presence in the powerful nations of Europe also lends itself to that project. If you depart, what will become of your reputation or influence on a continent increasingly populated by those who hate you?

We are told repeatedly by the dispensers of Hasbara that we in the West should ‘stand with Israel’ in her times of peril. And that of course is very proper and correct. We should do. But we should also expect reciprocation.

After all, if you go and Muslims remain, Europe will lose a vital and reliable source of resistance. That will leave the prospects of Jihad much brighter and the likelihood of European survival greatly diminished. Even in Israel, the fallout from an Islamified France or Sweden will be felt. Sweden is already voting to recognise a Palestinian state, no doubt under duress from its swelling Islamic population. Without a Jewish-led opposition to such suicidal policies, Israel might find itself left with only Washington as an ally. In my opinion, it would be extremely dangerous to place all your eggs in the basket of a post-Obama, soon to be minority-majority America. Especially one where even the Republican base increasingly jostles for a more isolationist foreign policy.

So don’t flee. Stay here. Lock arms with us. Fight alongside us and be willing to defend our common values. This is your home as much as anyone else’s.