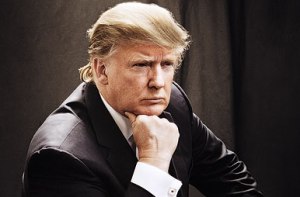 With one curt reply, Donald Trump solved the conundrum of how Western leaders should react to the Syrian Immigration crisis. Instead of fumbling about for the right excuse, or degenerating into platitudinous psychosis, Trump met the contempt of the Left with a shield of toughest reason.

Should Trump become President in 2016, the Syrian refugees now headed to America (under Obama’s policy of general cultural surrender) will, he said, be made to leave. He gave no detail as to where they will go, but he was decisive (his jaunty, masculine tone never trembling) that they will go. Why? “They could be ISIS” he explained, and much to the chagrin of liberal press infiltrators, the audience receiving this news erupted into thigh-slapping approval.

“They could be ISIS” is such a straightforward, commonsensical rationale that the Left will surely pick at it ruthlessly in the weeks to come. Liberals, after all, don’t like common-sense; it’s far too reminiscent of the working classes they so despise (and pretend to represent). Liberals prefer (and will only listen to) lengthy, pseudo-intellectual theses from bespectacled East-Coast vegans (or even better, granola-crunching Scandinavian Leftists) composed in order to justify or extend the reach of government. Common sense just won’t cut it. Common sense doesn’t even have formal accreditation.

But this commonsensicalism is nevertheless the correct attitude for a prospective Presidential candidate to adopt. In politics, the issues are only as complicated as you choose to make them, and the Syrian immigrant debacle is at heart quintessentially simple. A country filled with hundreds of thousands of violent barbarians is busily issuing forth a stream of undocumented, unidentifiable strangers into the civilised world. The organisation responsible for the destruction of that source country has pledged its willingness to plant operatives in that human stream; their ultimate intention being to wreak a comparable havoc on Europe, as they already have on their own soil. When one considers the pastimes presently popular in ISIS-controlled territory (head-lopping, virgin rape, forced marriages, limb amputation among various others…), it is therefore the height of intellectual clarity to prevent the human stream from penetrating the borders of civilised nations.

I didn’t need to write any of that, of course. Trump made the same point with perfect austerity – “They could be ISIS”. As a statement, it can hardly be improved upon.

Still, if it helps the block-headed leftists better understand the point, perhaps Trump might in future use the analogy of contagious disease. If the human stream issuing from Syria was rumoured to contain carriers of Ebola or Bird Flu, the borders of the civilised world would surely re-appear as if by magic. It is the accepted responsibility of government to prevent the spread of disease where it is possible to do so. Why should this be treated any differently?

Islamisation is markedly worse than any organic malady. Once a country has been Islamised, that is usually how it will stay for many centuries. Ask the Albanians, the Bosnians or the Berbers. Unlike the treatment of a medical condition, overturning a cultural transformation is impossible without revolution, violence and chaos. Collected together, the number of historic deaths related to Islamic conquest – that is, from both Islamising and de-Islamising – runs into the wild millions.

Any policy able to defend us against this process must be considered.