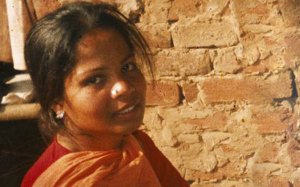 Last week a reader drew my attention to the suffering of a young Christian Pakistani girl called Asia Bibi. Ms Bibi, as you may already be aware (it is to my shame that I was not), is currently in prison facing the frighteningly common charge of ‘blaspheming the Prophet Muhammad’, a charge she denies.

According to ChristianToday: “Bibi was accused of blasphemy in Pakistan for sharing her faith in God to other women… She was then sentenced to death, although an appeal has been filed at the Supreme Court with no news yet on when her case will be heard. But time is running out for the Christian woman since her health has been steadily declining… She’s suffering from internal bleeding. She requires urgent medical treatment. She vomits blood. She suffers terrible pain, and she can hardly eat.”

Though pressure is being relentlessly applied by Christian organisations and charities in the West, Ms Bibi’s fate remains uncertain. Many have been punished viciously for the same ‘crime’ before, and since Ms Bibi herself is surely aware of this, one can only attempt to imagine the mental torment she must be experiencing. In July of this year, Pakistani authorities announced that the death sentence is ‘suspended’, but this is subject to challenge from the country’s powerful religious establishment. As of the time of writing, Ms Bibi is in limbo.

Of course, this story will not surprise any regular visitor of this site. We all know well enough the reality of Islam and its relations with competing belief systems. Those who wish Ms Bibi to die are being entirely faithful to the commandments of Islamic law and follow a precedent dating back to the Islamic Salaf (the early companions of the Prophet). This is what Islam does. We have no right to recoil in shock anymore.

But it is nevertheless worth remarking – in case there remains any doubt – that cases like this wholly exonerate the West from any obligation to uphold or respect ‘multiculturalism’ for the benefit of Muslims. Since Muslims themselves reject and despise the idea of multiculturalism, why on Earth should we allow them to enjoy its privileges?

Years ago in America, during the white heat of the ‘Ground Zero Mosque’ controversy, the host of Fox’s satirical ‘Red-eye’ show was dead on the nail when he proposed that the mosque should only go ahead if a Synagogue was built in Mecca (the source of much of the project’s funds) first.

No, simply put, it isn’t, and so a shift in policy is long overdue. No more Mosques in the Western World. If the Muslim world will not tolerate Christianity, the West has the right to expel Islam wholly from its midst.

13 thoughts on “Asia Bibi and the Muslim View of Multiculturalism”