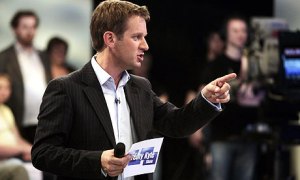 I was passing time on YouTube the other day, when I noticed a link in the sidebar to a clip of the Jeremy Kyle Show.

For those who don’t know, the Jeremy Kyle programme is (while ostensibly a talk-show) really a crude exhibition of the trashiest members of British society airing each morning on the ITV channel. In a typical episode, members of the English underclass (some of them astonishingly unkempt) are wheeled on to defend their benefit-fuelled affairs, hit-and-run impregnations and habitual drug abuse. The host (Mr Kyle) is an aggressive moral-majority type, with (for all his faults) a commendable bravery in confronting his subjects.

The clip I was directed to featured a young Northern man who was charged with beating his pregnant girlfriend, at times kicking her in the stomach. The male was a Muslim (probably of Pakistani origin) called Fakir, and in the course of the show (link below) he revealed himself to be of the purest evil imaginable.

When questioned whether he beat his (White) partner, Fakir didn’t bother to deny the charge. In fact, he found it hard to stop laughing at the issue, apparently surprised at the swelling chorus of hatred within the audience. When pressed to elaborate, his excuses never extended beyond a claim his girlfriend (who throughout the course of the programme appears utterly broken in spirit) had ‘annoyed’ him.

This isn’t the kind of programme to ordinarily affect my emotions. Shows like the Kyle programme are usually too fake, too orchestrated, too manhandling of the viewer’s mood to take seriously. But when I studied Fakir – his facial expressions, posture and accent – a host of thoughts began to swarm around my mind, quite foreign to my personality. Goulish thoughts – like how satisfying it would be to hurt that man; to kick him, or beat him into a deep coma.

His giggling evil; his skinny, pathetically unmanly frame; his complete lack of conscience or moral orientation… These elements all combined to light the fire inside me.

I’m aware that such thoughts should never be entertained. The law is surely the only protection we have left against bacteria like Fakir. But never let it be argued that the hostile sentiment amassing against Muslims in Britain is a purely native initiative. Brits would scarcely be human to avoid feeling burning revulsion at these creatures. They are constructing their own detention centres. They are energising their own tormentors and preparing the conditions for their wholesale removal.

I have no idea if Fakir will ever read this. But on the off chance he googles himself and finds this blog, let me say this: We are rapidly losing patience with this kind of abuse. There is only so much we will take, and you will not be forgotten when the time comes to arrange a lasting justice.

2 thoughts on “Fakir the Bacterium.”