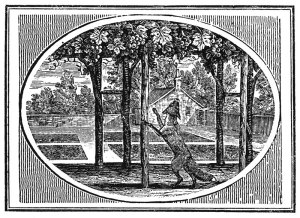 One of my favourite characteristics of the English language is its abundance of idioms and ‘folk expressions’; phrases which can be used to express very complex ideas with simplicity and brevity, provided the other party is of a cultural kin.

You’ll no doubt have your own favourite example. Mine is the old phrase ‘Sour Grapes’.

As with other elements of our language, this idiom is now commonly used incorrectly. Many people believe ‘sour grapes’ to mean being bitter or annoyed about losing a game, when actually it is much more beautifully nuanced than this.

The ‘sour grapes’ idiom derives from a story in ‘Aesop’s Fables’ about a fox who tries to reach a high-hanging vine of perfectly ripe grapes. When he is unable to do so, he dismisses the grapes as being sour, in order to delude himself out of his own disappointment.

This idiom is very useful – I find – to the modern situation as we confront it.

How much of Muslim rage against the West derives from a genuinely held belief in cultural superiority, and how much of it is – like the fox and the grapes – merely cognitive dissonance? Do Islamists hate the West because they genuinely love their poverty, or do they detest the West because its glistening fruit is beyond their capability?

To pursue an answer, let’s try a thought experiment:

Imagine a Pakistani youth walking down a high street in London. In the course of his journey he notices all the furniture of a modern, secular culture; a group of lightly clothed women congregating together without a family chaperone; smartly-dressed business people of both sexes enjoying a red wine lunch; young lovers walking hand in hand, having chosen each other freely, without filial or tribal consideration; and all about him rises the glassy architecture of an affluent, free and developed nation, built by people other than his own.

Isolated and confused by all this, he thinks to himself:

“Look at all these soulless, decadent sinners!” and pledges his energy to their collective destruction.

But then suddenly, out of nowhere, a magical figure appears in a puff of smoke and offers the startled fanatic a bargain –

“I feel sorry for your discomfort” the figure whispers “….And so I’m going to give you two ways to alleviate it… The first is for you to be born again in Pakistan, away from all this horrific liberty, and never to learn of it. Or, alternatively, I can make you one of these very people, in appearance, identity and lifestyle, so that it no longer bothers you and this tension is resolved.”

As to which option the Muslim would take, it is impossible to give numbers. We can nevertheless provide case studies of ideological weakness which suggest the latter option might often be more likely than the former.

Before embarking on the deadliest attack against the West this century, some members of the al-Qaeda hijack-squad are believed to have engaged in numerous un-Islamic practices on American soil, such as attending strip-clubs and getting blind drunk at liquor bars. Similarly, their ring-leader Osama Bin Laden, according to the Navy Seals who disposed of him, is said to have kept a large stash of Western pornography at his Pakistani compound. Meanwhile, the main regime credited with exporting the ideology utilised on 9/11, the Saudi Royal Family, routinely sends its younger members to Europe for a ‘private education’, during which their licentious, playboy behaviour has become notorious in London hotels and German brothels.

Closer to home, we have the following example: According to the Daily Mail, numerous students who attended University with the figurehead of British terrorism, Anjem Choudary, allege that the fanatic – despite his professed devotion to Sharia – was known to engage in extreme sexual promiscuity and drunkenness when away from the prying eyes of his family.

Finally (and most horribly), the Jihadi death squads who stalked unguarded neighbourhoods of Baghdad after the overthrow of Saddam Hussein were widely reported to have executed dozens of young men for possession of alcohol whilst under its influence themselves.

I could go on of course, but I don’t think I need to.

Is it enough to write all this off simply as hypocrisy; or might we justly infer a motive outside of the official excuse of religious piety? To tidy it up into a question: Do Islamists actually believe they are right, or are they merely thrashing around in a fit of nihilism and self-denial because they recognise they are wrong?”

My favourite novelist Martin Amis wrote against this idea in his masterful history of Stalinist genocide ‘Koba the Dread: Laughter and the Twenty Million’. ‘Koranic rule’ he wrote ‘is meant to work’. It is meant to result in affluence, ‘swimming pools and atomic bombs’.

According to Amis’s position then, when Muslims erect a society like that attempted by the Taliban in Afghanistan, they sincerely and unironically believe that Sharia law – harshly applied – will eventuate in a Utopia that shames the West by its own example.

As much as I admire Amis’s gifts, I must disagree with him here. Islamists might be fanatical, and psychopathic, and unreasonable, but I don’t believe they are stupid.

More likely for me is that they, like the fox, cannot admit to themselves that they have failed and – worse – that a great historic rival has got to the fruit instead. To concede as much would require a renunciation of the superiority of Sharia law and thus of their deepest held convictions.

Trapped between this terrible humility and an intolerable status quo, their violence is merely music to drown out the sound of their contradiction.

When George W. Bush suggested in a post-9/11 speech that al-Qaeda ‘hate us (America and the West) for our freedom’, he was roundly mocked, including by those on the right who otherwise agreed with him. It sounded implausible and contradictory. Why would people become suicidally angry about another culture’s success?

Cognitive dissonance is the answer, and I hope you’ll agree that (on this at least) President Bush is owed an apology.