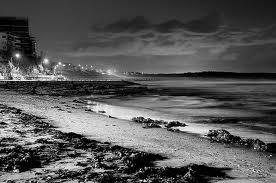 Though we might dislike the fact of their settlement, there is at least some geo-political logic to the presence of Islamists in Europe. North Africa and the Middle East (both of which are blighted with fundamentalism) are separated from the continent by a small distance of light blue water. One can reach the outlying islands of Italy from Libya or Tunisia within a couple of hours by boat. One can swim the distance from Morroco to the Iberian peninsula. The European Union furthermore is a Leftist initiative that cannot (and anyway does not try to) police its most critical borders.

The presence of radical Muslims in Australia however demands a greater explanation. Australia is one of the most remote countries in the ‘Western’ definition, close but not too close to the most civilised and affluent country in the Muslim world, Indonesia.

For a long part of its short history, Australia barred any non-European immigration under the so-called ‘White Australia’ policy, and to date retains one of the strictest immigration policies in the G20.

Despite this, subsequent reforms have enabled Australia to undergo a partial multicultural enrichment; principally from Indonesia and China, but also from the Indian Subcontinent and Middle East. There are currently an estimated 72,000 Lebanese Muslims in Australia, and they haven’t been slack in amassing a reputation.

In the year 2000, a gang of fourteen Lebanese Muslim men carried out a campaign of sexual terrorism against the women of Sydney and its surrounding suburbs.

“In the space of two months” wrote Sarah Crichton and Andrew Stevenson “Seven teenage girls who identify as Australian….were abducted and pack-raped by members of a group of youths their own age. Three others escaped the boys’ clutches. At least 19 youths were involved in the attacks, though not all were present at every one. One girl was assaulted by four, another by two.

A police investigation captured 14 boys, most living within a few streets of each other in Greenacre, within weeks of the crimes. Five are related by marriage. All were born, raised and educated in Australia and identify as Lebanese Muslims, or just “Lebs”, although two had mixed parentage…. Some chose to add racial abuse to their rampage. The teenager raped on August 30 was called an “Aussie pig”, told she would be raped “Leb-style” and asked “does Leb cock taste better than Aussie cock?” by three of her assailants. Another girl was asked her nationality and concluded: “The world isn’t what I thought it to be – it isn’t safe and females are punished for being Australian.” ‘

In 2005 several Lebanese men altercated with a group of volunteer lifeguards on Cronulla beach, demanding the lifeguards ‘their’ territory, before brawling with two of them.

As news of the incident spread, the sparks connected to a long fuse of resentment in the area…. and then something extraordinary happened. 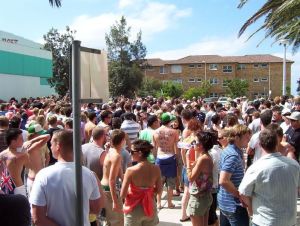 The following Sunday morning, more than five thousand local Aussies decided to make a stand at Cronulla beach to protest against the social terrorism being inflicted by the Muslims.

It’s worth repeating that number so it isn’t overlooked. Over five thousand. This is considerably more than the EDL have ever managed at a national demonstration. Cronulla was ostensibly a local dispute (although clearly one with more worldly overtones), and yet out people came in overwhelming numbers. Some carried placards demanding action by local and national authorities. Others merely made defiant gestures of Australian patriotism. All stood in the defence of a stable and affluent country against an aggressive campaign of intimidation.

If you research this civil uprising on Google, your search engine will rebrand the affair as the Cronulla ‘Riots’. Needless to say, this is disingenuous and unjust. While there certainly were undesirables (and moronic racists) present, the ‘riots’ described by the media refer only to the actions of a few hotheads. The initial demonstration was law-abiding, and given the provocations described above, inevitable and appropriate.

I call Cronulla an ‘uprising’ even though I know that word conjures to the mind images of flames and baton-rounds. True, the violence was distracting, unjustified and unfortunate, but other than this, Cronulla had all the markings of a stand for civil rights; a ‘civil uprising’ of defiance and initiative carried out within the law, aimed at those transgressing it.

Australia is a country extraordinarily blessed with isolation, stability and a demographic profile conducive to social peace. The defenders of Cronulla, no matter how much they are defamed by a craven and cowering media, demonstrate that there are some people willing to preserve this good fortune by whatever means are appropriate.