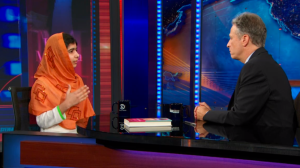 Well, it seems Her Excellency Madame Yousafzai is about to go viral, much like a YouTube video of a cat falling down a stairwell.

As with such videos, people seem to be appreciating Yousafzai without the labour of engaging their minds.

I suppose this is easily done. After all, Yousafzai is young, pleasant looking, and was shot by bad people. That is – technically speaking – all you’re supposed to know, or indeed think about. To doubt her brilliance, in any case, is to side with the Taliban. You’re probably also a bit rayciss.

A Telegraph blogger (who should frankly know better) recently called for Yousafzai to receive the Nobel Peace Prize, a nomination for which there was already considerable support online. A supporting facebook page quickly attracted thousands of ‘likes’ and many famous lovelies chimed in to support the idea too. The only deviating voice came from the Guardian….. who declared Yousafzai ‘too good for the Nobel peace prize’.

One wonders then what would be good enough for her? Queen of Pakistan? UN Secretary General? Pope?

As it happens, the award went to those charged with dismantling chemical warheads in Syria. A victory for proportion if ever there was one.

Although it provided me with some light therapy, I fear my first Yousafzai post was otherwise like those angry Iraqis who – in 2003/4- threw stones at American Tanks. Malala is unstoppable. There are going to be many books written about her, hundreds of them, and based upon these will be movies, big, Hollywood epic movies. There will also be speeches alongside Obama, Cameron and whoever succeeds them. Only a fool would rule out a music career….

For now, we may as well get used to her moneyed grin. It’s going to be with us for a long time.

8 thoughts on “Malala Goes Global: The Birth of an Industry.”