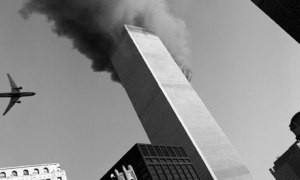 Between late 2000 and 2002 I studied music at a local college, a course I later abandoned. Most of that time has faded to a blur now. The only day I still remember vividly is a very cold and damp Tuesday.

On this day, we were studying audio production and the way to manipulate the sound of instruments after they are recorded.

When I arrived home after class, I was just walking up the stairs when my father stuck his head round the corner of the lounge doorway “Have you seen the news?”

I went upstairs. As soon as the bedroom door closed behind me, my thoughts were about music again. It was only in the evening that I began to have paranoid ideas.- “What if Britain has to go and fight alongside the Americans? What if there’s conscription? What if we all have to go to Afghanistan?”

I soon got over such nerves. Still a left-wing guy in spirit, the next day at college I joined with those who suggested America partly deserved the assault. I pointed to the ‘occupation’ of the Chechens and Palestinians, and compared the violence suffered the prior afternoon to the bombardment of the Iraqis during the first Gulf war. Juvenile and baseless stuff as it was, I really believed it. It wasn’t until beginning University many years later that I was forced to do a screeching U-turn.

My feelings regarding the attack now are ambiguous. The bombings were certainly spectacular in their scale and ingenuity, but I think we are wrong to view them as especially unique. 9/11 wasn’t the start of a new assault on the West, but the logical continuation of an ancient project. Only the numbers killed make the tragedy exceptional.

When someone mentions 9/11 as an argument against Islam, people often roll their eyes and say “Can’t you just let it go. It was twelve years ago.”

This is why 9/11 shouldn’t be presented in isolation. Since that day, the same force has inflicted violence on London, Madrid, Mumbai, Boston, Paris, Jerusalem, Kabul, Baghdad, Moscow, Beslan, Bali, Stockholm and Glasgow. And before 9/11, there were the attacks in Tel Aviv, Lebanon, Somalia and Kenya. And before the modern age of terror, there was the cold-blooded butchering of the Armenians, Syriacs and Maronites. We can go back through history and point to the same force inflicting the same outcome again and again and again.

Though the attack on New York was a great education, some of our ancestors knew as well in their day as we know now. The true value of 9/11 is that we can never forget it.