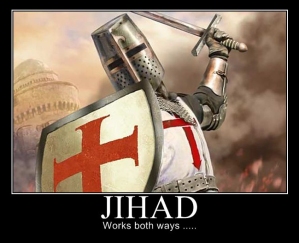 I was emailed the other day by an American who had visited my blog for the first time. She wrote that she agreed with most of what I had to say, but strongly objected to my frequent use of the term ‘CounterJihad’. This term – as well as the movement it represents – she said, was just as hateful and dangerous as its opposite. To quote her directly:

‘A CounterJihad is like fighting evil with evil. I’d rather fight against evil’.

I have already written back but I think the clarification is worth sharing.

CounterJihad, in the sense that I use it, does not mean a Jihad against Jihad. I am not suggesting or condoning the idea of a religious war, nor the idea that we must become as fanatical as the Islamists in order to defeat them.

For me, the prefix ‘Counter’ means roughly the same as ‘against’ or ‘anti’. This is exactly equivalent to the ‘counter’ prefix in the security term ‘Counter-Terrorism’. Counter-Terror forces are not named as such because they commit acts of terror against terrorists, but because they are an opposing force to terrorism.

The meme above, in which a Crusader figure is depicted along with the caption “Jihad works both ways.” is not the right image for us to convey, even for the purpose of propaganda.

Far better would be an image of Seal Team 6 or the British SAS, who combine their cold-blooded credentials with a degree of moral excellence. Something which elevates them incalculably above the scum of al-Qaida and the Taliban.