An argument I’ve often had with friends typically begins with my endorsement of America as being superior to both Britain and continental Europe. While this isn’t exactly a ‘radical’ opinion, it doesn’t go down well with everyone.

Despite America’s supremacy in almost everything, there are many Europeans (and even more numerous Muslims) who don’t believe this to be evidence of anything. Such views are rooted in a comfortable fallacy which imagines America to have somehow cheated its way to world-domination. Americans are considered to be too various a type and too recent an invention to be given any kind of credit for what their nation has achieved.

Needless to say, I strongly disagree with this and would like to make an opposing case for you here. Here are five (and there could obviously be many more) reasons as to why America is – in my view – intrinsically superior to the countries of the EU…..

If you go to Google Maps and compare aerial photos of London and New York, the most obvious difference between the two is the design and functionality of roads. In Manhattan, the buildings are imposed on a pre-planned grid of intersecting, straight lines; an urban design known as a ‘Grid city’. In London, by contrast, the roads and streets are clearly improvised, spidery and tangled up with one another.
I suppose the question of which layout is superior depends greatly on your own preferences, but for me, the significance of the grid city is deeper than town-planning; it is a statement of common sense and the product of a no-nonsense practicality. This is something (common sense) that Americans have in abundance, and which we Europeans lack and often scorn. The grid city is not supposed to be attractive or romantic or ‘classical’. It is purely logical, neatly functional and unapologetically modern. In fact if a single phrase could sum up the American ethos, ‘Unapologetically modern’, would be it. 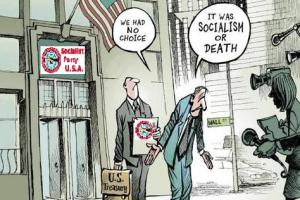 It’s a question every child asks at some point in their development:

A responsible American parent would answer with reference to this being the natural state of mankind. A European – in fact let’s be more direct – a European Socialist parent might answer with a longwinded philosophical critique of inequality, the free market, and (of course) of the United States of America.
Only the first child is being given something of value here. The second learns nothing except the art of resentment.

American ‘simple-mindedness’ on matters of government and economic policy has long aroused the contempt of the European and third-world Left. Leftist intellectuals have constructed tortuous theories as to how, despite all its riches, America remains somehow inferior to Europe. It matters not that even France is (officially at least) a Capitalist country. Americans are considered uniquely guilty among the beneficiaries of Capitalism because they are so infuriatingly good at it.

Capitalism in America allows individuals to flourish from the tiniest beginnings. European socialism by contrast, sands the whole of society down to a smooth and unproductive equality. The present global situation (America booming, Europe collapsing) is not a freak aberration, but the logical result of Europe’s refusal to commit (without reservation) to the modern idea.

America is the home of the modern world. Burkas, public stoning to death, beheadings, and prohibitions against music aren’t welcome here….. By no more complicated reasoning than this, Americans across the spectrum are saying NO to the enrichment of Islamisation.

Minus the USA, either the Nazis or the Soviets would have triumphed in the Second World War. Whichever regime won, there is no convincing reason to suppose that they would not still be in power to this day. The Jews of Europe would be a memory, as would European notions of freedom, progress and individual creativity. In every important way, the continent would be held in stasis. Asia would have long ago surpassed Western European countries economically.

America prevented this by applying the principles of commercial production to the creation of its military.

After 1945, had America so desired, this military could have conquered pretty much every country outside of the Soviet Bloc. It remains colossal today.

If you want to know what awe feels like, just imagine the US army deployed at its maximum extent: Thousands upon thousands of fighter jets would provide support for acres of tanks and armoured vehicles. Submarines across every ocean would be ready to fire hundreds of cruise missiles in any direction, each of them powerful enough to destroy a mansion or presidential palace. Nuclear warheads of varying yields would be available for global delivery from land, air and sea.

Mass Production has made an army strong enough to end history.

The linking of the military to the profit-motive is controversial, but because of the success of this complex, every citizen in every democratic country can sleep a little easier at night.

British people are not supposed to be nationalists. This is because the UK is not a country, but a group of countries, many of which dislike each other. European nationalisms likewise, are becoming more and more difficult under the soft tyranny of the EU. Given time, American nationalism may be the only Western variant which survives.

Though European nationalism has shot itself in the foot many times over, America still deserves the majority of the credit for this. I put the success of American Nationalism down to its civic and ideological emphasis. One can be fanatically proud of being American and not be suspected of the vulgarities of racism, xenophobia or hatred of others. It isn’t – after all – a pride in a jawline, or a nose-shape, but in a set of heroic ideas universally aspired to, but only rarely achieved.

I hope these points are valid to you. I should add that I’m in no way denigrating Europe or Europeans. I am a European and believe that our geopolitical area could be vastly improved if we were a little more humble and willing to learn from others. China, notably, has done so, and is pursuing ambitious policies strikingly similar to the mass-construction and armament sprint of America during the 40s and 50s. We would do well to follow that lead.

On a final note, you may have read the following George Clemenceau quote that is often circulated by Liberals on the internet

“America is the only nation in history which miraculously has gone directly from barbarism to decadence without the usual interval of civilization.”

If it was said today, then maybe it would seem a valid point. America plainly has succumbed to forms of decadence. But it was most likely said in the roaring 20s, a time not merely of Jazz and champagne, but of massive construction and modernization across every US state. Let this appalling myopia be yet more evidence of the European capacity for self-delusion on this topic.

17 thoughts on “5 Ways in Which America is Superior to Britain (and Europe).”