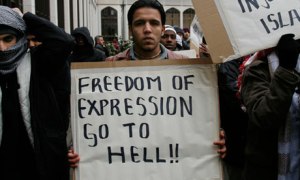 “If you don’t like it here, then why don’t you f**k off back to where you came from!”

It’s a taunt as old as multicultural society itself, but this – the oldest and most basic expression of xenophobic discomfort is still one of the most effective available.

There was a time when this phrase was directed against all kinds of people with immigrant-origins – from African pensioners to Asian shopkeepers to Mixed-race schoolchildren. Nowadays (thankfully) it seems reserved exclusively for use against the Muslim population of the Anglophone West.

I’m not sure precisely how we ought to deal with this, morally-speaking; a phenomenon that began as lazy and randomly (mis)directed, and yet which now seems so neat and reasonable. I suppose it depends on whether something originally racist can become non-racist in a different context.

Racial hatred, at least of an explicit kind, has long gone out of fashion in the Western world and few openly espouse it. Consequently, when someone uses a phrase like the above, it sounds like a reversion to something every immigrant knows they no longer have to put up with.

This is understandable, but a shame nonetheless. As phrases go, this one is actually quite helpful, especially in todays context of Islamisation.

When applied against Muslims, this taunt manages to get to the heart of Islamist hypocrisy but at the same time bypass any reference to their race and/or appearance. It’s worth repeating to consider again….

“If you don’t like it here, then why don’t you fuck off back to where you came from!”

The first part of this insult (if it is one) presupposes that the Muslim in question has made a complaint about Western society, and has suggested that his (Islamic) way of living would make a superior replacement. This is becoming ever more regular, and will only carry on increasing alongside the numbers of the Muslim population itself. I no longer feel any surprise when I am told by Muslim proselytizers that Britain (and the West) is a moral sewer and that “Islam is the answer”.

The second part, “Why don’t you fuck off back to where you came from!”, should be properly understood as a question, even if it was meant originally to be rhetorical. It is one worth asking repeatedly…..

Why don’t Muslims, who say they dislike the licentiousness of Western life, move to a state run along Islamic lines?

Evasive answers to this – for example, “I was born here” should be discounted. Being born somewhere is not a tether which cannot be cut. I too was born here, but I often consider moving.

The real answer, and the one Muslims will never provide, is that they know (deep-down) that Western society is superior to the societies of their ethnic homelands; that the West is richer and happier, as well as more advanced and free and allowing of difference than Pakistan or Qatar.

They don’t leave because they don’t want to leave.

There is a yawning disconnect here, between what Muslims are told by religious elders to believe, and what their life-experience has shown them. When the tension between these two realities becomes unbearable, then the Western Muslim usually does one of two things – he either becomes an extremist, or (more rarely) he leaves Islam. Both occasions present ways of getting rid of the Muslim in question, either by replacing him with a prison-number, or else with a newly formed Christian/atheist.

Consequently, the harvest of “If you don’t like it here…” usually rewards the labour (and risk) of planting it.