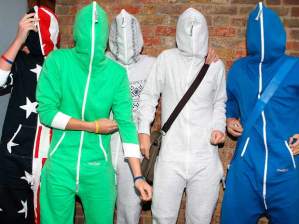 It seems that the craze for adult babygrows – rebranded as ‘onesies’ –  has now stalled and will soon enter a period of red-faced decline. Those who fell victim to the ludicrous fad can now begin the work of stitching up the damage to their social credibility, probably by invoking the cards of ‘irony’, humour, or (if these fail) intoxication. Meanwhile, those of us who always were amazed at the herd insanity of such people, can glow with righteous satisfaction.

But why am I mentioning it here, on a political blog? Well, it’s known that fashion, like any other element of popular ‘culture’ acts as a kind of shadow government. It controls and governs the masses beneath the consent of electoral politics. More importantly (and worryingly) it also provides a barometer of national intelligence and mood.

The craze for Onesies may be lessening, but much still has to be explained as to how such a strange trend could emerge in the first place. Who is to blame? What went wrong?

If anyone ever doubts the fallibility of the human mind to acquiesce in the most degrading kinds of behaviour, I point them in the direction of the harrowing documentary. Jonestown: The Life and Death of People’s Temple.

The story of Jonestown is well known. So well known that the (pretty insensitive) phrase “Don’t drink the kool-aid” has become common parlance. The phrase is designed to caution those who seem to be blindly following a herd, especially when that herd is itself blindly following a fallible authority. Whether or not it is unkind to use it, given the tragic nature of its source material, is irrelevant. What it gets right is more important than what it gets wrong.

The insinuation behind the phrase is that the lesson of Jonestown is not limited to freakish cults, but can be justly applied in other more everyday contexts.

And as the macro can be applied to the micro, so can the micro be applied to the macro. The fact that Onesies are so ridiculous, ugly and embarrassing for those forced by their weak minds to don them, coupled with the wildfire success of the fad itself, creates genuine cause for concern.

Where can fads go after adult babygrows? Perhaps some devious social scientist could deliberately create a fad for not wearing trousers. If it was endorsed by Justin Bieber, there’s no reason to think we wouldn’t see it become the norm….for a few weeks at least.

And then after the hypnosis of peer-pressure fell away, the affected consumers could look into mirrors, horrified at what they, and the human average is reduced to.

But it isn’t just fashion. This herd-madness is ruling the era. It elected President Obama. It motivates those vague, nihilistic protests against Capitalism which blight London streets every weekend. It is part of a pattern of general human degeneration known scientifically as ‘Dysgenics’. People are not just becoming more easy to round up and control. They are also becoming thicker.

Anyone over 25 who uses YouTube and is foolish enough to get into a debate with another user will immediately feel their generational distance from contemporary teenagers. ‘Text-speak’ is one thing. The sentences I’ve read on YouTube defy logic. They remind me of the “word salad” ramblings of patients suffering with Amphetamine Psychosis.

And before the ‘age’ card is played against me, I’m in my twenties. I know and understand slang perfectly well. This is not and has never been the issue. People who notice that literacy is becoming worse with every new generation typically blame ‘slang’ and mobile phones because they are afraid of other explanations. But this is both rong and riddickoolus yeah? The words people cannot spell are not urban phrases but the basic mechanics of language. This can only lead to a less fluffy and digestible hypothesis.

A recent article in Prospect magazine drew attention to the alarming fact that the average British IQ appears to be falling.

“A study in 2009…. compared IQ scores obtained by British teenagers in 1980 and 2008, using the same test. The average had declined by two points on average, but by as much as six points among teenagers in the top half of the IQ scale, a fall that wiped out the previous two decades of gains in that group.”

Does this matter? It might do. Especially as we prepare to go toe-to-toe with 1.4billion Chinese with an average IQ over 100.

But that’s a long term issue. In the short term, we must confront the idiocracy forming at the base of British society and prevent it spreading further. That’s the best we can do for now, Innit?

6 thoughts on “Dysgenics, Onesies, and Kids getting Dumber.”